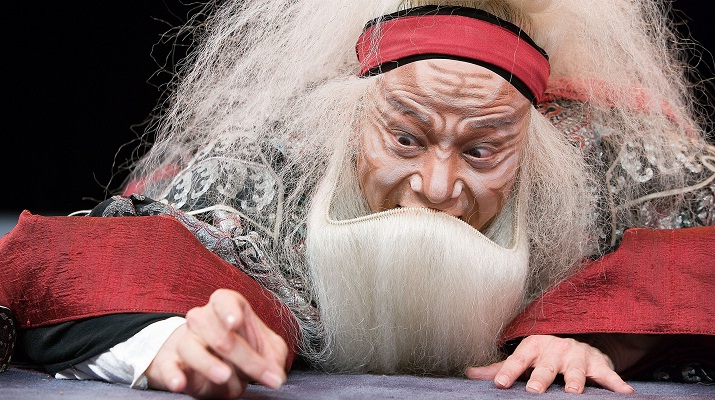 King Lear is the first production after the revival of the Contemporary Legend Theatre in 2001. Wu plays 10 different characters, from the main male role, to the female role, to the painted face male role, and to the clown in 100 minutes. Within the framework of the modern theater, Wu’s character changing challenges the limit of the performing art. The unique yet aesthetic King Lear is highly recognized by the western world. King Lear was once invited to more than ten countries, including the Lincoln Center Festival in New York, Odéon Théâtre de l’Europe in Paris, Odin Teatret in Denmark, and the Edinburgh International Festival in England. In June 2012, King Lear was invited to the International Festival of Arts & Ideas in New Haven. The local press, New Haven Register, recognizes King Lear by the statement, “even Yale assuredly has never seen anything like Contemporary Legend Theater’s ‘King Lear’,” as the conclusion of the article, One Man’s ‘King Lear’ Opens at International Festival of Arts & Ideas in New Haven. “The production of King Lear by Contemporary Legend Theater of Taiwan mixes the ancient and the modern to startling effects,” praised by the New Haven Review in the article Still Don’t Know How He Did it: Wu Hsing-kuo’s One-Man ‘King Lear.’

Founded by Wu Hsing-Kuo with a group of Peking Opera actors in 1986, the Contemporary Legend Theatre has been dedicated to cross the boundary of the traditional Chinese performing art and create a new genre for the theatre by adapting the western classics into the traditional Chinese performing art. The theatre, mingling the theatrical elements of the east and the west, expands the boundary of the traditional Chinese performing art, and has become the uniqueness and the spirit of the Contemporary Legend Theatre. The debut of the Contemporary Legend Theatre, The Kingdom of Desire, the adaptation of Shakespeare’s tragedy, Macbeth, applying the four techniques of the Peking Opera, singing, reciting, acting, and martial art performing, successfully subverts the audience’s existed understanding of the Peking Opera and creates the innovative aesthetics of the Eastern theatre. Ever since it was founded, the Contemporary Legend Theatre has been invited to perform abroad for many times, including the Royal Opera House in London, England, the Festival d’Avignon in France, the Festival of Asian Performing Arts in Tokyo, Japan, the Odin Treatret in Denmark, the Spoleto Festival in America, the Lincoln Center Festival in America, and the Edinburgh International Festival in England.

Wu Hsing-Kuo, the artistic director, director, and the actor of the Contemporary Legend Theatre, is the one and only performer in King Lear. Graduated from Fu Hsing Dramatic Arts Academy and the Drama Department of Chinese Culture University, Wu had started learning the singing and the martial arts of Peking Opera austerely since the age of 11. Among the few, Wu is an extensive performing artist in film, television, traditional Chinese performing art, modern theatre, and dance. During his time in the Drama Department of Chinese Culture University, Wu was inspired by Shakespeare and thus experimented adapting Shakespeare in Peking Opera. Because of the loss of his father at the age of 1, and the loss of his mother when he was a junior in college, Shakespeare’s tragedies resonated with his dreary life and thus become his inspirations in theatre. After founded the Contemporary Legend Theatre with a group of young Peking Opera actors in 1986, Wu adapted Macbeth into The Kingdom of Desire as the debut of his company. The debut made a hit and later was invited to many international art festivals.

Established in 1913, The Cleveland Museum of Art is one of the leading museums in America, providing spaces for international exhibitions, academic exchanges, and art learning. The performing art series, Viva & Gala, curated by the Department of Performing Art, Music, and Film, provides audience an inclusive program in depth. King Lear will surely give the opportunity for the local residents to appreciate the beauty of Taiwanese culture and art.

After the performance in Cleveland, King Lear will be performed respectively on February 1st and 2nd at the Centre in Vancouver for Performing Arts as a program of PuSh International Performing Arts Festival.