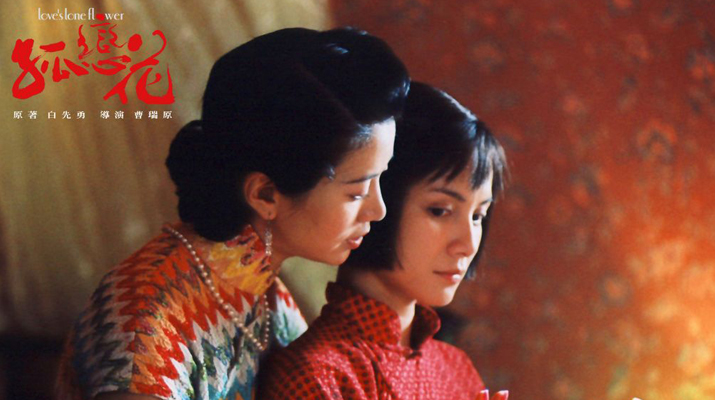 This year, the Taipei Cultural Center and National Museum of Taiwan Literature are proud to present the first-ever U.S. film series to showcase films based on works of fiction by Taiwanese authors. Showings of Jade Love , The Moon Also Rises, and The Song of Cha-tian Mountain ?based on works by Kenneth Hsien-yung Pai, Ang Li, and Chao-cheng Chung respectively?will be followed by a discussion with Pai, Li, and the director Yu-shan Huang, intended to deepen American viewers' understanding of the films and widen their appreciation of Taiwanese film and literature.

Jade Love, dir. Yi Chang, based on the novel by Kenneth Hsien-yung Pai
Jade Love is based on Kenneth Hsien-yung Pai's novella of the same name, one of Pai's early works. Yu Ching, a war widow, leaves her in-laws'home to work as a servant in the house of Jong Ge, the male protagonist. Jong Ge's first-person narrative tells of Yu Ching's single-minded, headlong love affair with Ching-sheng, a man considerably younger than her, who suffers from tuberculosis. Yu Ching supports Ching-sheng out of her own pocket, only to realize that she cannot hold him, which leads her to hatch a destructive notion.

The Moon Also Rises, dir. Cheng-sheng Lin, based on a short story by Ang Li
The Moon Also Rises, based on Ang Li's short story "Lotus in the Western Paradise,"tells of a divorced mother living alone with her daughter, cut off from the world. When her growing daughter begins a romantic correspondence with a young man, it kindles her lust, and she begins a transgressive love affair with the object of her daughter's affections.

The Song of Cha-Tian Mountain, dir. Yu-shan Huang, based on the novel by Chao-cheng Chung
The Song of Cha-Tian Mountain, based on the last novel in Chao-cheng Chung's Taiwanese Trilogy, depicts Taiwan's tragedies under colonialism and the struggles of the Taiwanese people for a new life. Toward the end of the Second World War, as the Japanese Empire tightens its internal policing, repressive thought-control measures in Taiwan spark protest by Taiwanese intellectuals. A young Taiwanese man, Chih-hsiang Lu, returns after studying in Japan full of idealistic ardor, and struggles with loneliness in a turbulent era. The film is a tribute to how, amid large historical currents, ordinary people fight to survive and persevere in their ideals; it explores the subtleties of human nature and the power of the human spirit.
Back
返回頂端
關閉選單
Keywords: 文化部
fb youtube mail