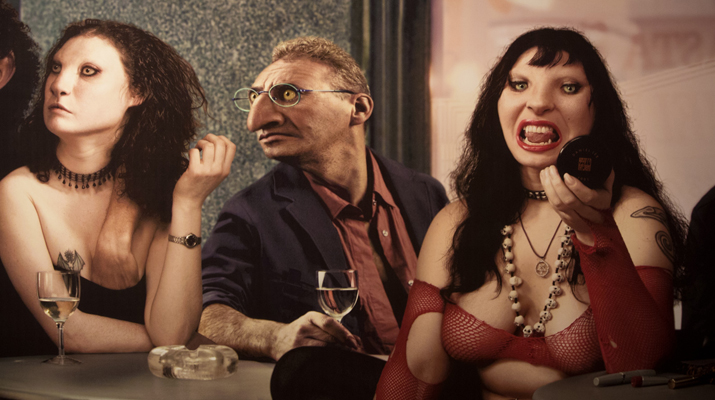 The Photographs of Daniel Lee

?Origin? is a series of manipulated photo images and animation created in 1999, depicting an imaginary version of human evolution. The artist envisions ten stages of human evolution, beginning with fish (coelacanth) and progressing through reptile, monkey, and other life forms.

The coming of the new millennium?the year 2000, a grand new beginning?provided Lee with the inspiration for this work. The project began when The New York Times Magazine invited Lee to create a self-portrait for a special technology issue in 1997. Lee made a sequence of four portraits showing a human evolving from an ape-like form, then pushed it further, imagining that all mammals, as well as reptiles and fishes, were originally related to us.

Lee photographed his models with strobe lighting in front of seamless paper, using a Lite Phase digital camera back on a Hasselblad camera. Thanks to digital technology, he was able to photograph each model separately in his studio. He then digitally arranged the furniture and set it against the background of a SoHo restaurant.

Daniel Lee's latest work, "Nightlife," is a portrayal of the basic, animal interactions that occur between people in today's urban environment. Its centerpiece is a mural depicting the ecological diversity found within an ordinary street cafe. There are ten additional portraits segregating the scene into smaller habitats.
Back
返回頂端
關閉選單
Keywords: 文化部
fb youtube mail