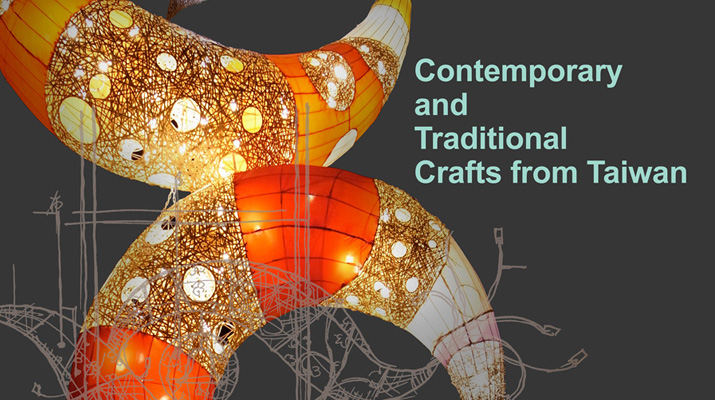 The fifth year of Luminaria (2012) in San Antonio, Texas, which opens on 10 March, will see three Taiwanese craft artists, Wang Yao-Teng, Lu Ping-Cheng and Lee Hung-Wei, participating in the design of large-scale lantern from 24 Feb through 9 March. It is an official invitation by the Office of Cultural Affairs of the City of San Antonio to the National Taiwan Craft Research and Development Institute mediated by the Taipei Cultural Center in New York. All overseas friends and art-lovers are warmly welcomed, as well as support and assistance to the Taiwanese craft artists.

Distinct Taiwanese Art and Culture to Add Charm to the U.S. Artistic Event

In 2011, large-scale lanterns designed by Taiwanese craft artists in the entrance arch of HemisFair Park showcased Taiwan?s unique lantern culture and won the admiration of visitors. This year, craft artists from Taiwan return to the City of San Antonio to amaze visitors with this year?s new design, ?Eye of the World,? a large-scale lantern to be installed in the HemisFair's clock tower. It will be an experience that continues to boost artistic and cultural interactions between Taiwan and the United States.

Artists from Taiwan to Demonstrate Their Techniques in Huston, Texas

The three craft artists from Taiwan are: WANG,YAO-TENG, an experienced lantern master; LU PING CHENG, a specialist in large-scale installation art; and LEE- HUNG-WEI, who works in creative art and had returned from the United States. This year, they represent Taiwan in Luminaria 2012 with their joint new design, ?Eye of the World,? inspired by this year?s theme of ?light.? Radiant and spectacular as last year?s lantern, this year?s design adds a bell-ringing device and bamboo tubes that can produce sounds, rendering the lantern environmentally-friendly, and interactive and showcasing creativity from Taiwan, promising to create more interactions with the people of San Antonio. In addition, by employing bamboo, which can be found both in Taiwan and Texas, and locally specific cultural elements from the two places, a more profound exchange is achieved.

After the event, the three Taiwanese artists will be invited to demonstrate their techniques in in Huston, Texas, during which they will show how to make your own lanterns, bamboo baskets, and bamboo pentagon balls. It is hoped through the creativity and ardent devotion of these artists, Taiwan?s art and craft can also become part of Texas?s diverse and charming culture.

LU PING CHENG, from Yilan, Taiwan / Director at Lu?s Art and Creativity Laboratory
With more than two decades of experience in the field of design art, Lu had worked for more than ten years in the Cultural Affairs Bureau of Yilan County, during which he had participated in landscape design and large-scale playground equipment design for major events, and was on the committee board for the artistic category for numerous major events held by the Yilan County Government. After more than a decade working as a civil servant, which in the eyes of many is a stable and desirable job, Lu nevertheless decided to leave his position to establish his own Lu?s Art and Creativity Laboratory, so that he could more fully and freely devote himself to creative art. In Luminaria 2011, Lu was in charge of the lantern?s visual design, a role he continues to play in this year?s lantern making; this year, he adds more interactive elements, hoping to offer visitors new levels and aspects of experience.

WANG,YAO-TENG, from Tainan, Taiwan / Director of the Design Program at Kuang Hua Girls? Senior High School, Tainan
After almost two decades since he graduated from the department of fine arts, Wang has developed ardent interests in mixed media, including bamboo weaving, wood sculpture, stone sculpture, and lantern making, etc, based on his solid training as an art student. As a creating artist and a teacher at the same time, Wang has combined both interests in recent years and has accompanied students in various domestic or international competitions, in order to widen horizons and challenge his own limits.

Artworks and Exhibitions:
Participated as individual or as group member in the design competitions for the Taiwan Lantern Festival from 2007 to 2011 and was in charge of the following artworks: ?Jade in the Salt Fields Welcomes Visitors? (2007), ?As if in Fairyland?the Charming Chiayi People? (2010), and ?Rabbits and the Dancing Lion Celebrate New Year? (2011); participated in Shanghai?s Craft and Green Life Exhibition (2010); his bamboo weaving artwork ?Back Garden? was selected in the Taiwan Handicrafts Design Competition (2007).

LEE- HUNG-WEI, from Zhushan, Nantou / Member of Servicios Industriales de Taiwan en la República Dominicana, Taiwan International Cooperation and Development Fund
A graduate of National Taiwan University of Arts and majoring in painting and calligraphy arts, Li is an aspiring artist working in diverse creative fields. Guided by the principle of ?combining art and life,? Li incorporates different media in his bamboo artworks, such as copper, wool, paper, rattan, copper thread, painting, etc. Li often creates his works in third dimension or semi-graphic presentations; he believes that an artwork embodies more than just visual and tactile experiences, but should also excite the viewer?s sensation and be thought-provoking.