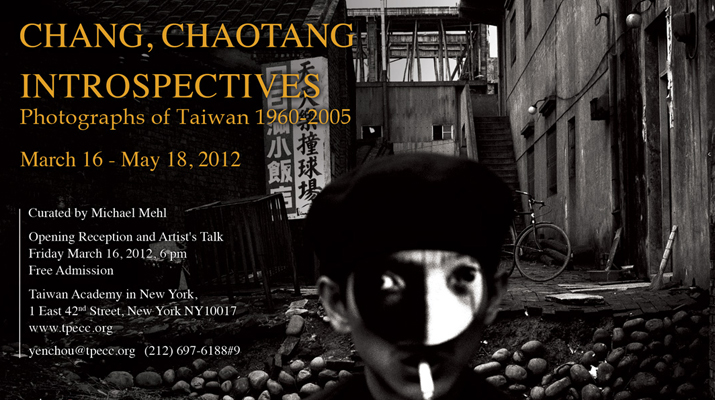 Chang Chaotang is a pioneering and innovative visionary photographer in Taiwan. Since the 1970's, he has continuously participated in numerous exhibitions in Taiwan, China, Korea, Japan, and USA. He was the first photographer awarded both the Taiwan National Awards for Arts (1999) and the Taiwan National Cultural Award (2011). As a photographic artist, writer, editor, documentary filmmaker, lecturer, and curator, he has been a formative influence on several generations of Taiwanese photographers. He currently teaches at the Tainan National University of Art and the National Chengchi University in Taiwan.

In his Philosophy of Photography, Vilem Flusser wrote:? It is wrong to look for a frozen event in images; rather they replace events by states of things and translate them into scenes. Images are needed to make the world comprehensible. Instead of representing the world, images obscure it until human beings? lives finally become a function of the images they create.?

As Flusser noted, in photography our realities are magically restructured into image scenes. To this point, Chang Chaotang's early works depict an extremely repressive time in Taiwan of the 1960's. In the 1980's his images were saturated with aesthetic expressions of surrealism ? a theater of the absurd ? and the simple ordinary things in life. In recent years, following the whims of his heart, he tends to see reality in terms of abstract minimalist landscapes. Surprisingly, in the end his images always reveal their essence of truth at its innermost depth.

Chang Chaotang has learned to look unintentionally and to focus spontaneously. His images are of real people and places, but they are not about superficial emotions nor are they just a result of being a witness to events. A transformation takes place, in which the images become encoded with metaphors, and with his thoughts. What grasps the photographer is not a view but a memory, an atmosphere or state that sparks an unexpected thought, a subtle emotion, or a whirl of energy. After all these years, he still tries to find that elusive, decisive moment in which he can capture an image that will breathe and live.
Back
返回頂端
關閉選單
Keywords: 文化部
fb youtube mail