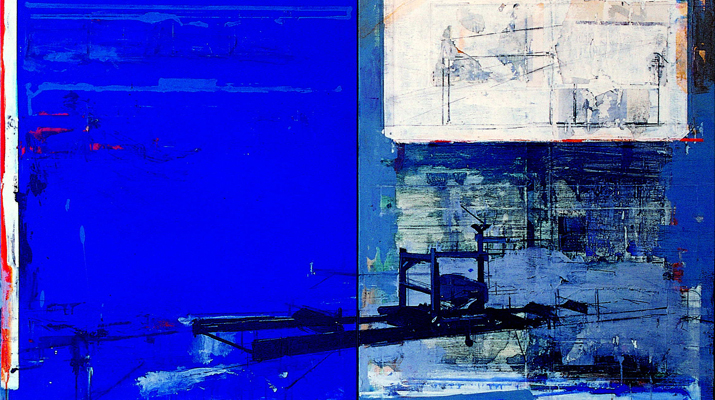 A thing of beauty is a joy forever:
Its loveliness increases; it will never
Pass into nothingness; but still will keep
A bower quiet for us, and a sleep
Full of sweet dreams, and health, and quiet breathing.
--John Keats, Endymion, 1818

LANDSCAPE is an exhibition by three artists from Taiwan YING-SHENG QUO, TZU-
CHI YEH and CHIEN-JUNG CHEN. They are using western media, Photography, Oil Paint and Acrylic, respectively; from their individual life experiences, they investigate and explore their own unique style and exquisite aesthetics. LANDSCAPE strives to retrace Art's primitive, simple essence and come back to the original core of the artist's heart and mind. This exhibition explores not so much the realistic or actual landscape that one can see with one's eyes, but more by revealing to the audience the impressions from the artist's inner landscape that the artist generates from a realistic landscape.

YING-SHENG QUO started his photography profession at age 19. In 1975, he traveled to Paris and studied photography in the Université Paris 8. He settled back in Taiwan in 1992. In this exhibition he shows a series of 16 photos entitled "The Vistas of My Memory". This group of black and white photographic works are Quo's early recorded moments of slices from various times and scenes; when put together, they construct the private, secret landscape deep down in the artist's heart. Although the time frame of these photographs stretches from 1980 to 1992 and their venues from European countries to Japan, they carry a consistent "expression" that is filled with the tone of the artist's feeling --a nostalgia, hidden, solitary, reclusive and isolated ambiance. One can't help but be moved and led to an indescribable desolate, bewildered feeling.

TZU-CHI YEH came to the US and entered the graduate school of Brooklyn College, CUNY, in 1987. He studied with Lennart Anderson and Lee Bontecou, and is inspired and influenced by these two renowned artists. During this period in New York, he developed his unique painting style. After living in New York for 19 years, Yeh and his family returned to Taiwan and settled in his old hometown Hualien. The four landscape paintings in this exhibition are the work Yeh completed after he returned to his hometown; their themes are the Banyan Tree of Tainan, the Ocean in Hualien, the Mountain of Tarogo and the Sha-Mao Mountain in Taipei, respectively. For Yeh, "Landscape" is the "outdoor still life". He captures the moments of mountain, tree and ocean scenery on a canvas to transform moving moments into an everlasting poetic picture.

CHIEN-JUNG CHEN was born in 1972. Acrylic is his medium, through which he develops his personal, uniquely distinguishable abstract language in describing a Landscape. He has created a series of landscape works using lines, volumes similar to that of an architectural structure. He uses patches and layers of color similar to a machinery object to create an intellectual and cold tone to give the audience a certain degree of familiarity that is associated with the landscape of the downfall of a city or an architectural ruin. It is a virtual landscape in an imaginary world that Chen constructs out of his real life experiences; consequently, the audience gets a sense of familiarity because of the way we decode the common denominators in our civilized urban life.
Back
返回頂端
關閉選單
Keywords: 文化部
fb youtube mail