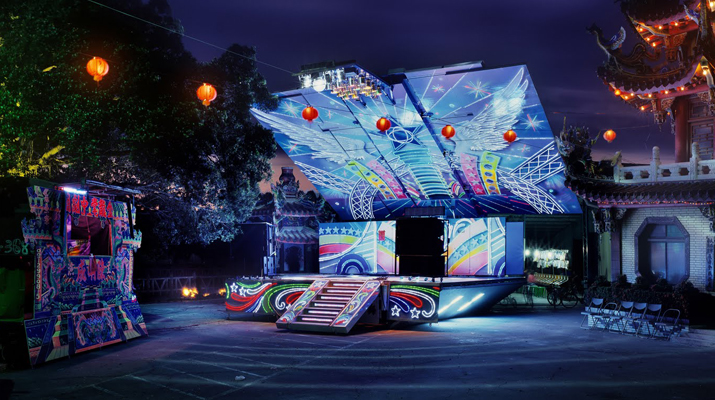 The FOTOSEPTIEMBRE USA International Photography Festival is a unique and eclectic forum for the exhibition and celebration of photography and photography-based art forms. Many outstanding artists exhibit with the festival each year. The exhibition features artists whose works show contextual consistency, sustained artistic growth, and a passionate commitment to craft. In 2011, for the first time, Taiwanese artists Chang Chao-Tang, Wu Cheng-Chang, and Ho Meng-Chuan were invited to present their works in the festival. This year, another Taiwanese photographer Shen Chao-Liang's STAGE will be exhibited.

Shen Chao-Liang was born in Tainan, Taiwan, in 1968. He has dedicated to feature photography since 1993. From his early works of Reflections of Nan-Fang-Ao (2001) to the latter series of Yulan Magnolia Flower (2008) and Tsukiji Fish Market (2010), Shen has been broadly recognized by his sophisticated style of image creation and commitment to documenting the evolution of Taiwanese society. Shen's works are published and exhibited both at home and abroad. He won the Golden Tripod Award of Best Photography (magazine category) of Taiwan in 2000 and 2002, and his Reflections of Nan-Fang-Ao and Taiwanese Cabaret series won the Asia Award in Sagamihara, Japan (2004), and the Best Foreign Photographer Award at the Dong-gang Photography Festival, Korea (2006). STAGE series were selected as the 2011 Photography Category Award Winner for Artists Wanted: Year in Review (New York). Shen's recent STAGE series, in which he documented a unique Taiwan entertainment culture in a surrealistic and colourful style of image, was exhibited in the 2008 Deagu Photo Biennale, Korea, the 2009 GETXOPHOTO, Bilbao, Spain, and a solo exhibition in Tokyo and Osaka, Japan, New York, US, and Toronto, Canada. He was also invited at the 2010 Dali International Photography Exhibition, China, the 2010 Taiwan Biennale, and the 2011 Contemporary Art Exhibition across the Strait in Beijing, China and Taichung, Taiwan, the 2011 Art Hong Kong, and the 2011 PHOTOQUAI, Paris, France. In December, 2010, the series won him the Honourable Mention of 2010 Taipei Art Award.

Hoping to display the other worldly scenes diffusing colors, totems, lights, and the ambience between the stage trucks and the surrounding, and visually re-creating the dreamy and colourful feel, Shen decided to set the universal time for shooting at sunset evenings, using only 4x5 color reversal films. As for the presentation of the STAGE series?mostly a no man's landscape incorporating the surrounding environment - Shen wants to bring out the presence of stage trucks, of their existence in the plebeian society, a strong contrast against the reality indescribable beyond words, while seeking to break away from the visual expression and form of traditional documentary approach by trending towards a new angled contemporary mode that seamlessly integrates environmental portraits, visual grouping and category construction.
Back
返回頂端
關閉選單
Keywords: 文化部
fb youtube mail