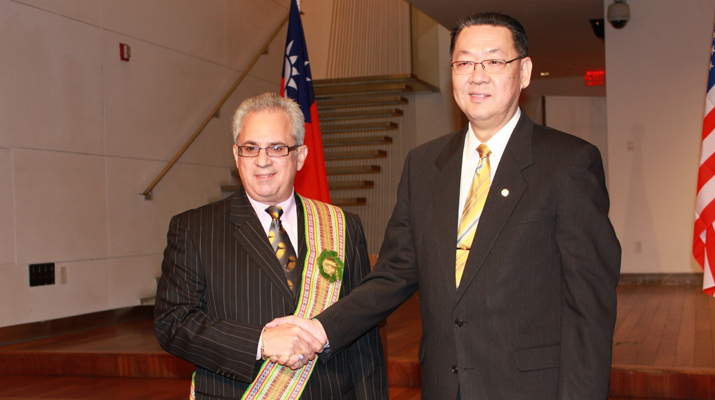 Frank Villani, manager of the City of San Antonio Office of Cultural Affairs (OCA), will be honored as a Cultural Ambassador for Taiwan in a ceremony at 11:30 AM on January 11, 2012 at the Taipei Economic and Cultural Office in New York. The prize is offered on behalf of the Council for Cultural Affairs, Republic of China (Taiwan) to individuals both in and outside of Taiwan who have made outstanding contributions to cultural exchange and the promotion of Taiwanese culture abroad.

The award ceremony is being held for the first time in the U.S., and the award will be presented personally by TECO ambassador Andrew Kao, demonstrating the extraordinary nature of the occasion.

Since its creation in 2005 the Cultural Ambassador Award has been given to, among others: Matthew Lien, a musician; Drs. Wenzel Jacob and Klaus-Dieter Lehmann, who were instrumental in bringing artifacts from the National Palace Museum to Germany for display; Dana Kalinova, director of the Prague International Book Fair; Father Giancarlo Michelini, founder of the Lanyang Dancers; Australian writer Thomas Keneally, author of Schindler?s List; Marcella Liburd and Sharon Rattan, Minister of Health and Culture and Permanent Secretary for St. Kitts and Nevis respectively; Felix Padron, director of the City of San Antonio Office of Cultural Affairs; noted Japan-based Taiwanese artist Judy Ongg; and Menno Goedhart, former Dutch Representative to Taiwan. In the past all of these awards were presented in Taipei by the Minister or Vice-Minister of the Council for Cultural Affairs of the Republic of China.

Beginning in 2006, when Villani began directing Art San Antonio, he cooperated with the Taipei Cultural Center in New York to bring groups such as the Taipei Folk Dance Theatre, the Happy Puppetry Company, the Acrobatic Troupe of the National Taiwan College of Performing Arts, and the Ju Percussion Group to San Antonio for performances, says Center director Shu-ching Yu. After he began working for the San Antonio OCA, Villani made even further contributions to exchange between San Antonio and Taiwan including organizing a Taiwan tour for the jazz group Henry Brun & the Latin Plaerz.

In 2011, on the hundred-year anniversary of the founding of the Republic of China, the Taipei Cultural Center broadened its cooperation with the government of the City of San Antonio. As part of its arts event series ?Splendid for One Hundred? it invited three Taiwanese lantern masters to attend the San Antonio arts festival Luminaria in March, during which the San Antonio OCA also released hundreds of lanterns into the sky. In September the OCA organized four exhibitions showcasing the Taiwanese contemporary photographers Chang Chao-Tang, Isa Ho, Wu Cheng-chang and Daniel Lee; in October it cooperated with the National Museum of History in Taipei to bring a collection of precious jade relics to San Antonio. In addition, it invited the Taipei Folk Dance Theatre and Cloud Gate Dance Theatre to perform again in San Antonio. Together these events represented a rare display of the diversity and richness of Taiwanese culture.

It reflects the Center?s special gratitude to Villani that for the first time the Cultural Ambassador awards ceremony will be held in New York, director Yu notes. The Center believes that acknowledging Villani?s fervent efforts on behalf of Taiwan-U.S. artistic exchange will strengthen and solidify its relationship with San Antonio, and hopes that more Americans will receive the prize in the future, paving the way for greater international collaboration.
Back
返回頂端
關閉選單
Keywords: 文化部
fb youtube mail