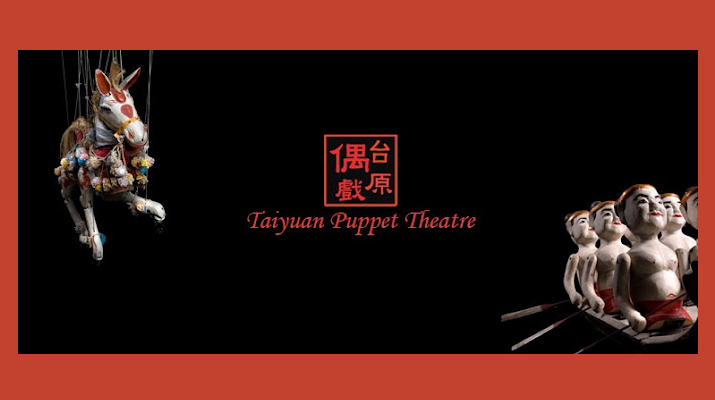 The Taiyuan Puppet Theatre Company, working with local and international artist partnerships and sensibilities, performs innovative visual music theatre through puppetry, acting, video and music. The company's initial inspiration is derived from the local Taiwanese glove puppet theatre, a rich and varied tradition in which music, carving, embroidery and a delicate performance technique combine. Taiyuan was founded in 2000 by the partnership of Creative Director, Paul Lin and Managing/Artistic Director Robin Ruizendaal to continue this tradition, while at the same time creating new modern theatre performances within a distinct Taiwanese context.

This model of conserving tradition and creating new plays has proved to be very successful. The company's shows have been performed in over 40 countries at venues such as the Purcell Room and the Victoria and Albert Museum in London, the rainforests of Central America, the Traditional Opera Theatre in Hanoi, Casa Mila in Barcelona, the countryside of Cambodia, Stanley Park in Vancouver, and, of course, the theatres of old Taipei.

?The Boy, the Shark and the Sea? is shadow performance and an adaptation of a Taiwanese aboriginal tale that resonates as powerfully today, as we long to achieve an ecological balance. The story emerges out of the childless longing of an elderly couple who unearth a taro-root, shaped like a child. The man rushes to the edge of the powerful ocean presenting the taro-child, and makes a plea to finally have his own child. Soon enough is wife conceives a healthy boy, but a boy who grows to nurture a secret companion. When the boy is alone with the treasured taroroot it transforms into a boy, like himself, perfect in every way, but colored like the
purple taro. The boys are inseparable in their private games and one day on a deserted beach they look out to find a huge shark, which the boy swims out to. The taro-boy does not follow. The boy soon disappears on the back of the shark and is gone for many days, learning the ways of the ocean. The villagers being to search for the boy, who is finally spotted riding the back of the shark. As a crowd begins to gather at the shore, the boy is so moved that the Shark agrees to return him safely. The anxious villages attack the approaching shark with spears. The distressed taro-boy is so provoked that he emerges from the forest and the astonished villages pause long enough to hear the taro-boy explain that the shark is concealing the boy safety in his mouth. The boy soon emerges triumphant and safe, but is heartbroken to see the injured shark. The two boys approach their parents declaring: ?You have two sons now and we are like the land and the sea together, cherish the land and the sea like you cherish us.? They help the shark to recover and it returns to the sea.
Back
返回頂端
關閉選單
Keywords: 文化部
fb youtube mail