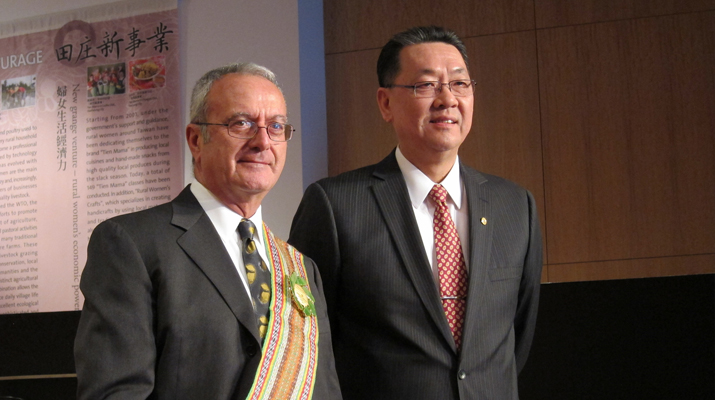 Joseph V. Melillo, executive producer for the Brooklyn Academy of Music (BAM), will be honored as a Cultural Ambassador for Taiwan in a ceremony at 11:30 AM on February 27th , 2012 at the Taipei Economic and Cultural Office in New York. The prize is offered on behalf of the Council for Cultural Affairs of the Republic of China (Taiwan) to individuals both in and outside of Taiwan who have made outstanding contributions to cultural exchange and the promotion of Taiwanese culture abroad. The award will be presented personally by TECO ambassador Andrew Kao, demonstrating the extraordinary nature of the occasion.

Mr. Melillo has been active in bringing Taiwanese dance groups such as Cloud Gate Dance Theatre and U Theatre to BAM?s Next Wave Festival, putting Taiwanese performing arts front and center on the American cultural stage. For both groups, BAM organized special events to celebrate their performances? premieres, inviting distinguished artists, patrons of the arts, media and government representatives to attend, thus greatly increasing the groups? visibility in the New York metropolitan area and throughout the U.S. BAM?s programming has been a powerful force in the promotion of Taiwanese culture abroad and deserves to be lauded.

According to Shu-ching Yu, director of the Taipei Cultural Center, Cloud Gate?s 2011 performance at BAM?the group?s fifth appearance in the Next Wave Festival?produced ?beautiful box office results? and was an event for which Taiwanese New Yorkers should feel proud. All this is thanks to Melillo?s discerning eye. The Center hopes that its acknowledgment of Melillo?s fervent efforts to present Taiwanese performing groups on the international stage will encourage others to program and support Taiwanese performances.

Since its creation in 2005, the Cultural Ambassador Award has been given to, among others: Matthew Lien, a musician; Drs. Wenzel Jacob and Klaus-Dieter Lehmann, who were instrumental in bringing artifacts from the National Palace Museum to Germany for display; Dana Kalinova, director of the Prague International Book Fair; Father Giancarlo Michelini, founder of the Lanyang Dancers; Australian writer Thomas Keneally, author of Schindler?s List; Marcella Liburd and Sharon Rattan, Minister of Health and Culture and Permanent Secretary for St. Kitts and Nevis respectively; Felix Padron and Frank Villani, director and manager of the City of San Antonio Office of Cultural Affairs; noted Japan-based Taiwanese artist Judy Ongg; and Menno Goedhart, former Dutch Representative to Taiwan. In the past all of these awards were presented in Taipei by the Minister or Vice-Minister of the Council for Cultural Affairs of the Republic of China.