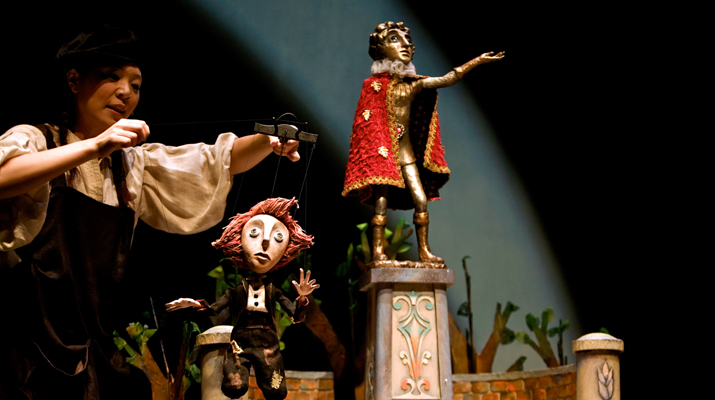 The Puppet and Its Double Theater, invited by Vancouver International Children's Festival, will perform The Happy Prince from May 24 to June 3, 2012. The Happy Prince is a famous short story written by Oscar Wilde in 1888. Through the interaction between a swallow and the happy prince, it elegantly describes the unpredictability of real life. In 2000, The Puppet & Its Double Theatre first adapted this warmhearted and moving fable into an acclaimed puppet theater work, featuring the "rod marionette" that is popular in the Czech Republic, modified with a special string for gestures. Two puppeteers manage all the elaborate props, multiple-characters, flat and three-dimensional puppets, bringing all their charm and warmth to the stage. The story is both happy and sad. An imaginary story that is true to life. It will make the audience laugh and cry. Poetic imagination and philosophic humor are displayed as the puppeteers manipulate various kinds of puppets that bring the deep humanity of the story to life.

The Puppet and Its Double Theater was founded in September 1999 in Taiwan. The company is composed of a group of enthusiastic puppet artists. With the viewpoint that? everything can be a puppet? and that? the puppet brings a dynamic expression for the contemporary theater,?
the Puppet & Its Double Theater promotes the puppet as a tool for freely expressing the performing arts. In addition, the company creates an abundance of work that exhibits the visual media with a rich and infinite imagination. The styles of puppet used include hand puppets, string puppets, rod puppets, table-top puppets, shadow puppets, object theater, and the combination of puppet and actor performing on the same stage.

The Puppet and Its Double Theater pour their emotions and feelings into their performances to give the puppet a believable stage life, and they find new ways to interact with audiences of all ages. Both of their shows I Am Another Yourself (2002) and Der Schönste Moment (2009) won the annual Tai-Shin Art Award as? Top 10 performances of the year.? The company, recognized as an outstanding professional group, is frequently invited to perform in international festivals. In addition to performances, the company dedicates itself to educational events to let the audiences participate in the fun of working with puppets. It also invites world famous groups
to perform and share their experiences in Taiwan. The company has become an international access for the cultivation of contemporary puppet arts around the world.

Through its continual efforts in creating new productions, educational promotions, and international exchange, the Puppet and Its Double Theater hopes to elevate audience's creativity and pursue the dream of innovation in puppetry, exposing the dynamic and rich possibilities of the puppet arts to Taiwan and the world.
Back
返回頂端
關閉選單
Keywords: 文化部
fb youtube mail