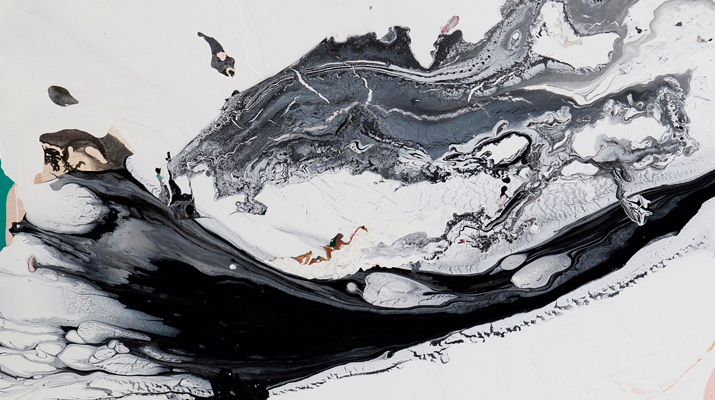 "I occasionally experience myself as a cluster of flowing currents. I prefer this idea of a solid self, the identity to which so many attach so much significance. These currents, like the theme of one's life, flow along during the waking hours, and at their best, they require no reconciling, no harmonizing. They are "off" and may be out place, but at least they are always in motion, in time, in place, in the form of all kinds of strange combinations moving about" With so many dissonances in my life I have learned actually to prefer being not quite right and out of place."
- Edward Said, Out of Place: A Memoir

In a global village, “hometown” is no longer defined by a region. So are the contemporary artists.  Educated multi-culturally and internationally, they cannot be defined by a certain nationality. The only certainty is the existence of one’s self and the essence of life- a flowing state of being. Most people emphasize the solidity of self-image, which comes from the society’s basic understanding of human beings. However, the fluidity of collision, mobility, or interweaving also echoes the subtle relationship among people living in an urban city. Just like the process artists bring their visions into fullness. In our life, we learn how to “flow” between cities and countries, and to coexist with ourselves and strangers. We need self-cognition as much as self-alienation. We are constantly in a tug-of-war between drawing others closer and keeping them away. “Float, agitation, contradiction, bafflement, and discrepancy.”  These words usually bear negative definitions, but they are also the essential elements in our life.  To survive in a “flowing” society, we need to masticate the negative energy through the creative process and transform it into a new experience.  Even if one manages to stay in a “stable” city, the essence of life is indeed flowing by nature.  Most people prefer not to experience such “flowing” anxiety, it is, however, the origin of an artist’s creation. Craziness or self-torture, the experience of isolation and the creation of art are inseparable.  The sheer joy from the creation itself is beyond words.

For Jenny Chen, abstract paintings are portraits of the “mind.” The mind changes and so do her paintings. That difference is, in fact, a nature state between the creator and the viewer. Abstract painting is an object of multiple sides. A different angle always reveals a different visual and spiritual truth. In her work, Chen looks for the meditation space between fantasy and reality. Her creative process is like a series of rituals for clearing the mind. Along the way, we understand more about nature, intervention, and the coalescence process of mind and Tao. Chen draws inspiration from the ancient Chinese philosophers, Lao Tzu and Zhuang Tzu. In Zhuang Tzu’s philosophy, “free mind” means a person’s spirit is not encumbered by anything, hence reaches a state of true spontaneity and nature, an “effortless effort” (無為 Wu Wei).  More over, if one could “understand the unity beyond everything” (齊物 Chi Wu), they would be fully liberated. (逍遙 Hsiao Yao)  That is Chen’s spiritual and creative compass.

Her artistic principle is the dualism, just like yin and yang, emptiness and solidity, movement and still, square and circle. Besides painting, her mediums also include sculpture, installation, and video. After her trip to Mount Huangshan (China) in 2004, black and white became the main colors in her works. Since 2008, she gradually added red and green to create a sense of calmness and passion.  She is skilled in manipulating the paint, creating layers of vortexes in and out of the square. The cube in her work “A Pound of Beams of Light” recreates an epic meditative sanctuary by massive recombination as each independent square is a transparent artistic conception.  If we take a closer look at this work, each square represents an aesthetic perception and a blend of layered colors. If we take a step back, a peaceful atmosphere naturally occurs, as if we were at a peak of a mountain, staring into the far distance. The installation, “UndergroundSea” of squares and circles are contrasts of each other like yin and yang. Inlaid grayish-white embellished resin at dark black iron plate, this piece is meant for the viewers to feel the struggle of trying to breathe.

The exhibition Without End demonstrates Chen’s uncertainty about the essence of life through her personal experience. The boundaries between cities and countries are sometimes ambiguous and sometimes distinct. Chen’s work is an honest reflection of her life, mostly vividly clear, occasionally shadowed by uncertainty.  Represented in her visual frame is a multi-layered space with colors flowing with ambiguous emotions. Facing the work as facing her life, whether it is a long period of contemplation or a brief moment, she does not force things to go her way. Showing her honest nature in a form between exaggeration and humbleness is the way of expression derived directly from her cultural and life experiences.

About Curator Joanne W. Chen
Joanne W. Chen is the former Marketing Director of Taiwan Art Gallery Association and Art Taipei (Taipei International Art Fair) from 2007 to 2010. Currently, she’s the founder of inCube Arts, a non-profit art organization, in New York City. She is also an independent curator, art consultant and widely published critic. Chen is also a board member for The Association of the Visual Arts in Taiwan. She has had many experiences in international marketing strategies, Art Fair programs, International PR relations, Art collector relations and sponsor collaborations. Chen has also curated international exhibitions such as“London Calling” a touring exhibition (China/Taiwan), Joshua Balgos’ solo exhibition “Whatever It Takes” at the Kuandu Museum of Fine Arts. She was also part of the curatorial team for artist SHY Gong’s exhibition “Pilgrimage in Labyrinth” at the Taipei Fine Art Museum and “Pseudo Hacker’s Art in Parallel Zone” at the Museum of Contemporary Art Taipei (MOCA). She has written and published her articles internationally in Art Investment, ARTCO, ARTITUDE, Art Collection + Design Magazine and the Art Taipei Forum Media. She also has been invited to be the lecturer for the Museum of Contemporary Art Taipei (MOCA) and “TAGA Art Gallery Administration Courses”. She currently lives in New York.
Back
返回頂端
關閉選單
Keywords: 文化部
fb youtube mail