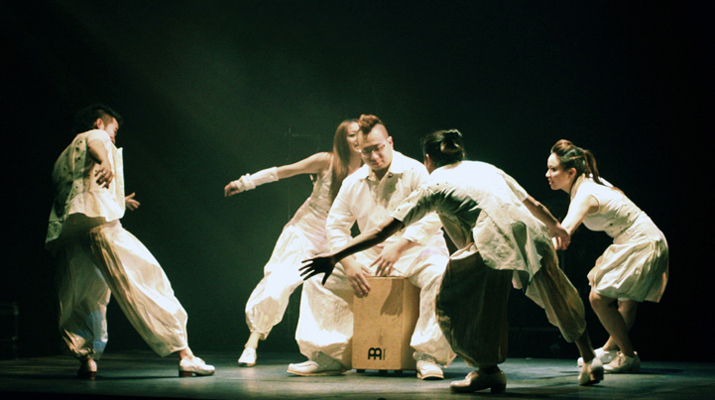 This June, Dance Works is proud to unleash, a classic performance resulting from a collaboration with world percussion musician Alex Wu that took over two years to complete. Daydreamer+ will give audiences a new kind of concert experience, combining the rhythm of tap with live musical performance featuring soft instruments from Chinese and around the world, to create an abundant cross-cultural atmosphere. With the rich musical nature in this dance, the tap rhythm turns into a musical art. Dance Works has recently been recording themusic EP, and once completed will be the group’s first tap album.

embarks from the confession of a daydream and brings forth several different images, taking the audience on a personal dream journey through tap dance. Aside from rhythmic music and beat of tap, projected images and laser effects add to the unbounded extension of dancer’s limbs. As one of the dance clips Breaking Trough, which used 220 strips of laser red line in pace with the tappers’ steps, explores the innermost being of oneself layer by layer, creating a moving visual that is sure to touch every member of the audience.has gotten rave reviews at every performance so far, and New York is sure to be no exception. Join Dance Works as they share a charming daydream in the Big Apple at Kumble Theater, July 12-15. To preview the dance clips, please visit http://youtu.be/9S4-34llyeo.