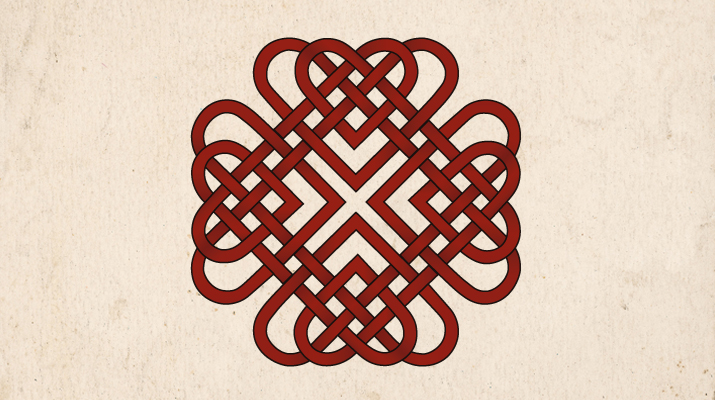 Chinese knotting is the practice of weaving string into auspicious patterns. Even 100,000 years ago China?s Paleolithic inhabitants knew how to weave with bone needles and thread, sewing together animal hides to keep warm?in other words, even cavemen could knot. By the Qing Dynasty, the art of Chinese knot-tying had evolved to its current refined state, with a kaleidoscopic array of patterns and techniques, elevating knotting from a handicraft to an art. But after the Republican era, the incursion of Western ideas and technology increasingly marginalized the art of knotting, and as a result this traditional practice has been fading from the world.

Due to the efforts of the Taiwanese government and people to promote the dying art form, Chinese knotting has experienced a resurgence in popularity. Utilizing an even wider array of materials?in addition to cotton, hemp, silk, and nylon thread, Taiwanese knotters have begun to experiment with metal threads such as gold and silver?Chinese knotting has taken on an even wider scope of decorative and practical purposes.

Chinese knots generally adorn clothing or are used as ornaments. Over the years knotcraft has transitioned from a practical to a decorative art, and Chinese knots frequently adorn clothing or gift packaging or are used for interior decorating. Anything bound by string can be tied with a Chinese knot. Particularly on celebratory occasions such as weddings, Chinese knots are used to spell out auspicious slogans?double longevity, twofold happiness, may wishes come to pass, and so forth. The sumptuous, dazzling appearance of these knots lend a joyful atmosphere to life?s most important occasions.
Back
返回頂端
關閉選單
Keywords: 文化部
fb youtube mail