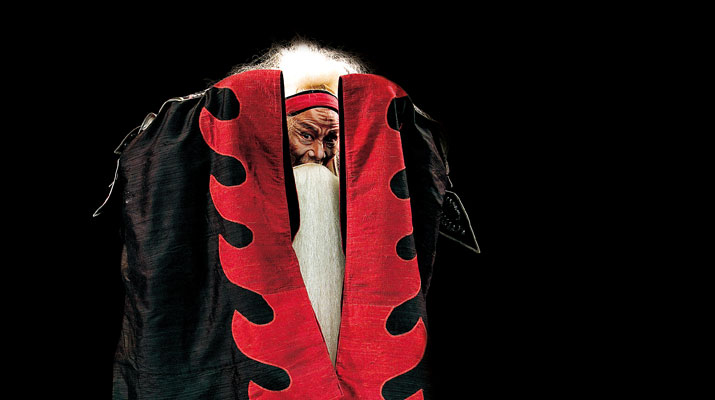 In1986, a group of Beijing opera performers, being keenly aware of the decline of traditional Chinese opera, began thinking seriously how to integrate traditional Chinese opera with modern theatre. Thanks to the efforts of WU Hsing-Kuo, WEI Hai-Min, and other equally enthusiastic young Beijing opera performers, Contemporary Legend Theatre (CLT) was founded. Since its founding, CLT has been invited to perform abroad many times such as the Royal National Theatre, London; the Festival d'Avignon (France); the Asian Performing Arts Festival, Tokyo; the 40th Anniversary of Odin Theatre (Denmark); the Lincoln Center Festival in New York; and Edinburgh International Festival, Edinburgh.

Mr. Wu, a versatile performing artist, crosses the fields of traditional opera, dance, modern Theater, cinema, and television. He received Fulbright Scholarship to study in New York with Richard Schechner in 1992. In the same year, he won the Hong Kong Film Award as best new actor. In 2006, he was invited to play, at New York's Metropolitan Opera, the Yin-Yang Master in The First Emperor, directed by ZHANG Yi-mou. After the CLT's extensive US tour of The Tipsy Concubine, Farewell My Concubine, and King Lear, in October 2007, Mr. Wu directed 108 Heros from the Water Margin, and directed/performed, in December, in The Butterfly Dream with Kunqu Opera actress QIAN Yi. In 2010 Mr. Wu adapted 14 shorts stories of Checkov, called ?Run!Checkov?. In 2011 Mr. Wu made 108 Heros from the Water Margin II as premium show in Hong Kong Art Festival, 2011.

For years, audiences in Taiwan and overseas have applauded CLT's performances, including adaptations of Shakespeare such as The Kingdom of Desire (Macbeth), War and Eternity (Hamlet), King Lear, and The Tempest; adaptations of Greek tragedies such as Medea and The Oresteia; the traditional play Yin Yang River; and newly written plays such as The Last Days of Emperor Lee Yu, The Hidden Concubine, and the innovative? hip hopera,? A Play of Brother and Sister. In 2005, CLT took on a new challenge by adapting Samuel Beckett's Waiting for Godot. This adaptation was appreciated by Walter Asmus, an expert on Beckett, who said? it decodes Beckett successfully, combines perfectly the beauty of theatre and poetry,? and by Ariane Mnouchkine, the artistic director of Théâtre du Soleil, who declared,? it will leave its mark in the history of modern theatre.?
Back
返回頂端
關閉選單
Keywords: 文化部
fb youtube mail