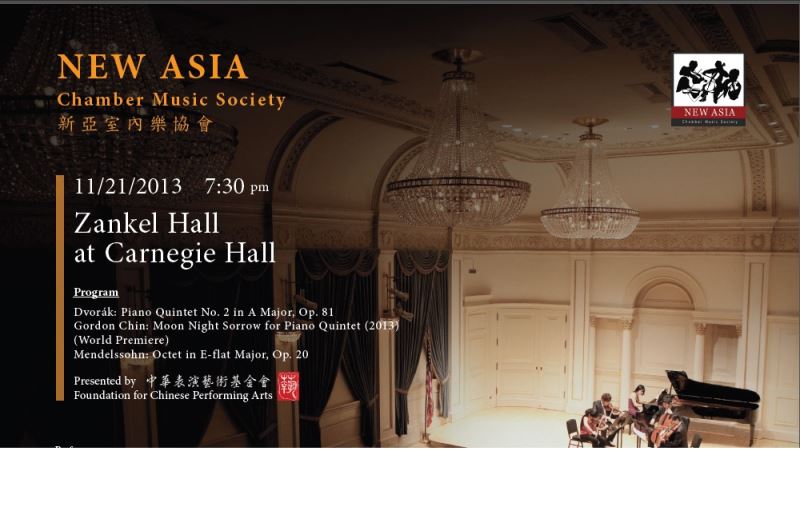 “…make music with sense of pleasure and spontaneity.”

“…comprised of many young and gifted players, is an impressively organized and professional group” – New York Concert Reviews.

Propelled by a shared passion for classical chamber music and profound respect for the works written by the composers of our time, the New Asia Chamber Music Society was founded in 2010 by an idealistic group of young Asian-American virtuosi, graduated from America’s most prestigious music schools, including The Juilliard School and the Curtis Institute. Members of NACMS including Paul Huang, Cindy Wu, Helen Huang, and 4 others will perform in this concert. Based in New York City, NACMS is committed to bringing audiences exceptional performances of the finest works of chamber music, drawn from the canon of western music as well as contemporary Asian culture. This unusual young collective also seeks to reach out to its technologically-wired peers around the world, through the creation of innovative new work in future partnership with other arts organizations.

Born in1957, Gordon Chin has established himself as one of the most prolific and sought after composers in his native country of Taiwan. Chin’s repertoire includes four symphonies, a cantata, an opera, three violin concertos, A Triple Concerto, a double concerto, a cello concerto, a piano concerto, numerous choral works, chamber works, five percussion quartets, and various works for solo instruments. Chin earned his doctoral degree from Eastman School of Music under the tutelage of Samuel Adler, Warren Benson and Christopher Rouse.

An album featuring Chin’s work including Formosa Seasons and Double Concerto for Violin, Cello and Orchestra conducted by Michael Stern with Cho-Liang Lin and Felix Fan as soloists was released by the Naxos Label in February of 2007. Chin currently serves as Music Director of YinQi Symphony Orchestra & Chorus in Taipei, and is a faculty member of National Taiwan Normal University.

Subtitle: The Song Sank into the Earth, Like the light into the Night (2013)

Commissioned by the New Asia Chamber Music Society, this single movement piano quintet was composed with several Taiwanese folk songs as the brush painting over the 1933 poem “Moon Night Sorrow,” a love song to a departed lover, by Wong-Tian Zhou. I emphasized the scenery (moon light, triple lines, and the gentle breeze) and the passion (regret, longing, and sorrow) over the underlying melody that was consistently present but always remained in the background. The scenery is quiet and soft in a greyish tone but the emotion are suppressed, deep, and raw. This kind of contrasting expressions appeared randomly reflecting the internal struggle. However, in the end it was still the moon, the gentle breeze, and the single shadow of a heart broken man.

Toby Appel has appeared in recital and concerto performances throughout North and South America, Europe, and the Far East.  He has been a member of such renowned ensembles as TASHI, and the Lenox and Audubon Quartets.  Mr. Appel has been a guest artist with the Vermeer, Manhattan, and Alexander Quartets as well as a frequent guest with the Lincoln Center Chamber Music Society and with jazz artists Chick Corea and Gary Burton. Festival performances include those with Mostly Mozart (NY); Santa Fe (NM); Angel Fire (NM); Colorado College (Co); Telluride (Co); Steamboat Springs (Co); Orcas Island Chamber Music (Wa); Seattle (Wa), Bravo! Vail Valley (Co);  Chamber Music Northwest (Or); and Marlboro (Vt); as well as festivals in England; France; Korea; Germany; Italy; Finland; Colombia; and Greece.  In 1975, Mr. Appel was featured in a CBS television special performing works commissioned by him for three violas, all played by Toby Appel.  In 1980, Mr. Appel was the winner of Young Concert Artists International.

A most versatile artist, Mr. Appel has narrated performances including:  A Young Person’s Guide to the Orchestra, by Benjamin Britten,  Ferdinand, by Alan Ridout and Munro Leaf,  Ode to Napoleon, by Arnold Schoenberg,  Histoire du Soldat, by Igor Stravinsky,  Masque of the Red Death, by Andre Caplet and Edgar Allan Poe, and Facade, by William Walton and Edith Sitwell.  Mr. Appel is a frequent commentator for National Public Radio’s Performance Today.

Toby Appel entered the Curtis Institute at age 13 under the guidance of Max Aronoff.  He is currently on the viola and chamber music faculties at the Juilliard School in New York City.  Other teaching has included professorships at the State University of New York; Carnegie Mellon University; and The Yale School of Music.  He has toured for the United States State Department and performed at the United Nations and at the White House.  Mr. Appel’s chamber music and recital recordings can be heard on the Columbia; Delos; Desto; Koch International; Opus 1; and Musical Heritage Society labels.

A native of Tennessee, pianist Melvin Chen is recognized as an important artist, having received acclaim for performances throughout the U.S. and abroad. As a soloist and chamber musician Mr. Chen has performed at major venues, including Carnegie Hall, Alice Tully Hall, Merkin Concert Hall, Weill Recital Hall, the Frick Collection, Kennedy Center and Boston’s Jordan Hall, in addition to other appearances throughout the U.S., Canada, and Asia. Solo recordings include Beethoven’s Diabelli Variations on the Bridge label, praised as “a classic” by the American Record Guide, a recording of Joan Tower’s piano music on the Naxos label, as well as recordings of the Shostakovich piano sonatas and Gordon’s Orpheus and Euridice.

Mr. Chen completed a doctorate in chemistry from Harvard University, and also holds a double master’s degree from The Juilliard School in piano and violin. Previously, he attended Yale University, receiving a bachelor of science degree in chemistry and physics.  Mr. Chen is associate professor of piano and deputy dean at the Yale School of Music. Previously, he was on the piano faculty of the Bard College Conservatory of Music, where he was also associate director.

Hailed for its “precision, assertiveness and vigor” (The New York Times), its “gripping intensity” and “suspenseful and virtuoso playing” (San Francisco Classical Voice), the Amphion String Quartet is a winner of the 2011 Concert Artists Guild Victor Elmaleh Competition. The Quartet recently served as the Ernst Stiefel String Quartet-In-Residence at the Caramoor Festival for the 2012-13 season and has recently joined the roster of the Chamber Music Society of Lincoln Center CMS Two program.

This past summer the ASQ had a diverse schedule of performances and festival appearances including Princeton University, New York University, BargeMusic, The Chautauqua Institute, Music Mountain, Cooperstown Music Festival,  Kneisel Hall, as well as a world premiere performance of a newly commissioned string quartet by Yevgeniy Sharlat at the Caramoor Center for the Arts.

Featured 2013-2014 season performances include appearances at the Tilles Center for the Performing Arts, Pepperdine University, Chamber Music Northwest, Friends of Music concert series,  Alice Tully Hall, the Library of Congress as well as internationally in Taiwan, among many others.  Collaborations include performances with Clarinetist David Shifrin in Wilton, CT and Pianist Gilbert Kalish at Alice Tully Hall.

Recent highlights included the ASQ’s Carnegie Hall debut at Weill Recital Hall on the CAG series with guest artist David Shifrin, the Phillips Collection in Washington DC, Caramoor Center for the Arts, TCAN Center for the Arts (MA), The National Arts Club, the MET, a tour of Northern California with concerts at UC San Francisco, Eureka Chamber Music Series and Montalvo Center for the Arts and numerous engagements throughout the Tri-State area.  Internationally they recently performed in South Korea at the Music Isle Festival in Jeju and at the Seoul Arts Center. In October 2012 they performed two Beethoven quartets live on WQXR as part of the Beethoven String Quartet Marathon.  The quartet also recently performed Brahms’ Sextet in G Major with Ani Kavafian and Carter Brey at the Mostly Music Series. In summer 2012, the ASQ made a return visit to the OK Mozart Festival and to Chamber Music Northwest, where the ensemble performed alongside the Tokyo String Quartet, Edgar Meyer, Michala Petri and William Purvis. The Quartet concluded its 2012 summer season with debut performances at La Jolla’s SummerFest, collaborating with such artists as violist James Dunham and harpist Deborah Hoffman.

Violinists Katie Hyun and David Southorn, violist, Wei-Yang Andy Lin, and cellist, Mihai Marica, first joined together for a performance at Sprague Hall at the Yale School of Music in February, 2009. The overwhelmingly positive audience reception at this concert was the inspiration behind their mutual desire to pursue a career as the Amphion String Quartet. Recent honors include the 2012 Salon de Virtuosi Career Grant in New York; First Prize at the Hugo Kauder String Quartet Competition in New Haven, CT; and First Prize in the Piano and Strings category as well as the Audience Choice Award at the 2010 Plowman Chamber Music Competition held in Columbia, MO.
Back
返回頂端
關閉選單
Keywords: 文化部
fb youtube mail