Home
Event 2015-2007
The Procreation, the Meander, and the Vision of the Compound Eyes
AAA
FB email 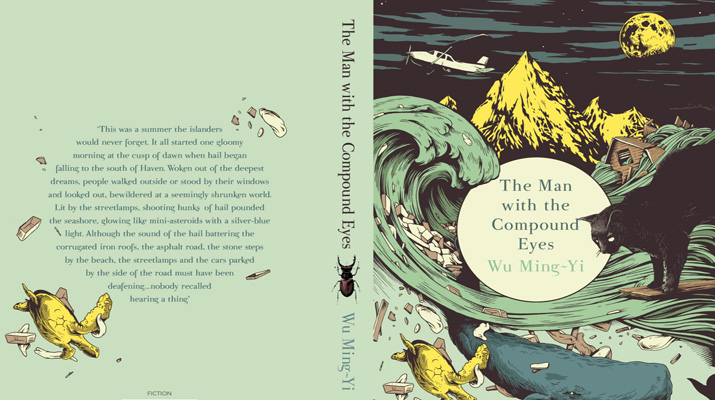 About five years ago, I read a news article in English on the Internet. It talks about the emergence of an extremely gigantic floating trash vortex on the Pacific Ocean, and the scientists having yet found a solution to it. The floating trash vortex sometimes appears in the wild, sometimes in some small towns, or sometimes by the seashores. I did not understand why the image of the island formed with all human beings’ throwaways which I have never seen before could not be wiped out of my mind. I started to mention this incident in class or at lecture. Gradually, in my mind, there appeared a youngster on the island. I named him Atile'i. Couple days later, he was presumed to be given birth on an obscure island on the Pacific Ocean. One day, I decided to name the island where the youngster was given birth to Island of Wayo Wayo. The novel then has started ever since. -- Ming-Yi Wu

The Man With the Compound Eyes has been published this August in UK by publisher Harvill Secker. Ming-Yi Wu, the author, and Darryl Sterk, the translator of the novel, will have a discourse with the audience at this lecture on the subject matters The Man With the Compound Eyes tackles, including the floating trash vortex on the North Pacific Ocean, as well as the solitude, struggle of a human soul, the inconsistent nature, and the human beings’ interaction with the environment portrayed in the novel. In addition, Darryl Sterk will also tell how he is bound up with the novel, and his thoughts about the novel.

This novel was described as “A Taiwanese Life of Pi”. Please come and join us for this wonderful lecture.

Born in Taipei in 1971, Wu Ming-yi, full professor in the Department of Sinophone Literature of the National Dong Hwa University, is a writer specialized in nature writing and fiction. His debut title Lord Tiger, a compilation of short stories, garnered the United Daily Literary Award in 1997. Three years later, his first nature writing, The Books of Lost Butterflies received Taipei Literary Award and was named one of the Top Ten Books of the Year (2000) by “Central Daily News”. And the second The Dao of Butterflies, published in 2003, was the annual 10 books on the Open Book Page of the Chinatimes and the most influential books of the Kingstone Bookstore. His debut novel, Routes in the Dream (2007), hailed as a groundbreaking work of literary historical fiction, was nominated for every major award and was chosen as one of the ten best Chinese-language novels of the year by Asian Weekly magazine. In 2011, Wu made his big break with his fourth novel, The Man with the Compound Eyes. Ten months after its publication, in November, 2011, Harvill Secker acquired the global English right to the novel. In 2012, HS sold Pantheon/Vintage the American right. Then Stock acquired the French right. His latest work, also published in 2011, is the collection of short stories, The Illusionist on the Skywalk. Both of The Man with the Compound and The Illusionist on the Skywalk received China Times Open Book Award.

Darryl Sterk is a Canadian scholar based in Taiwan. He discussed the national significance of interethnic romance in postwar Taiwan film and fiction in his dissertation (PhD 2009, University of Toronto), and recently has focused his attention on contemporary cultural primitivism in Taiwan. He teaches translation in the Graduate Program in Translation and Interpretation at National Taiwan University, and has translated Taiwanese literature into English for half a decade.
Back
返回頂端
關閉選單
Keywords: 文化部
fb youtube mail