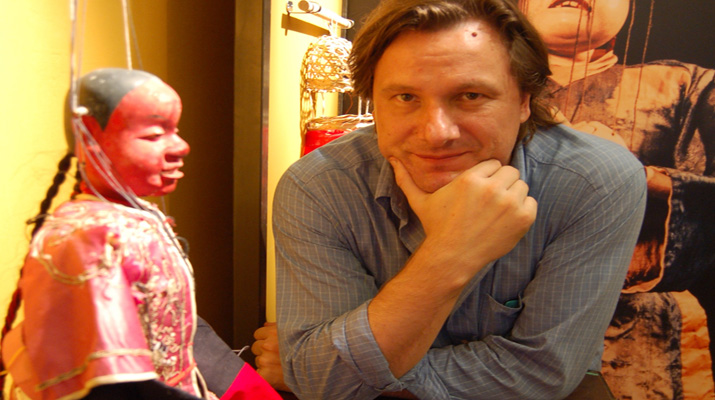 Dr. Ruizendaal, Director of Lin Liu-Hsin Puppet Theatre Museum, Managing/Artistic Director of Taiyuan Puppet Theatre Company, and a PhD in Sinology from Leiden University (the Netherlands), is widely acknowledged as an authority on contemporary Asian puppet shows. He spares no effort promoting international puppet shows in Taiwan, and works created or directed by him often show great originality and initiative. Under the influence of a varied background, Dr. Ruizendaal puts his professional skills at creating and directing puppet theatre art into full play. His works have been translated into 13 languages and staged in more than 20 cities in the world.

This lecture will present an overview of the current state of Asian puppet theatre in the era of mass communication and chart how traditional and modern companies function in contemporary Asia. Recently several puppet theatre museums have opened around Asia. In this context the case of the Lin Liu-Hsin Puppet Theatre is presented, which at present has the most complete collection of Asian Theatre Puppets in the world. The conservation and collection policy of the museum will be discussed, as well as its educational projects, lively interactive exhibitions and performances.

※Thank you for interesting in this lecture. This leture is now fully booked. Online RSVP is closed.

In this wonderful workshop the whole family will learn about Taiwanese puppets and how to manipulate them. Participants will also be decorating and painting their very own puppet, and bring it home as a souvenir.

Puppet theatre is viewed as an expression of Taiwanese grass-roots culture and the puppets symbolize far more than the characters they represent. Politicians from different parties are eager to be photographed with a puppet or puppeteer during election season. Television puppet shows have unleashed a craze among young people, which is quite unique in Asia. This lecture will chart the development of puppet theatre in Taiwan from the stage performance to the television screen and its role as a symbol of a distinct Taiwanese identity.
Back
返回頂端
關閉選單
Keywords: 文化部
fb youtube mail