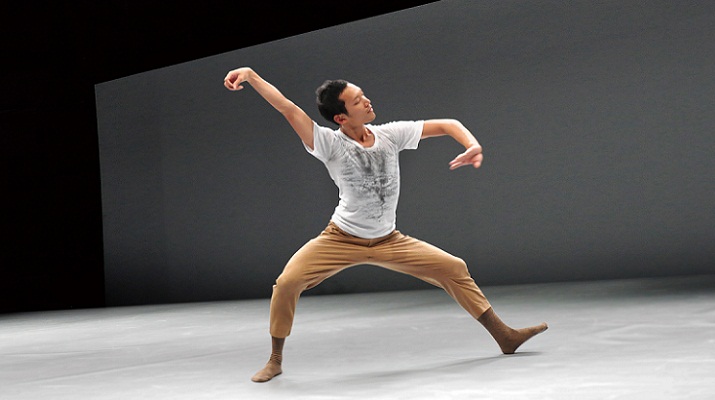 The Joyce Theater Foundation is presenting Cloud Gate 2 from Taiwan performing the U.S. premiere of On the Road, an evening-length work by Associate Artistic Director Cheng Tsung-lung, from October 2-6.

Cloud Gate 2, one of Taiwan’s most highly regarded companies, returns to The Joyce Theater with the U.S. premiere of Associate Artistic Director Cheng Tsung-lung’s On the Road, the Annual Performing Arts Award winner of the 10th Taishin Arts Award (2012), one of the most prestigious arts awards in Taiwan. Having received international acclaim since its world premiere in 2011, On the Road consists of playful duets and trios (three male dancers perform the work) and features contemporary dance elements derived from the Taiwan culture, including native performance art and religious ritual movement. Conceived by Cheng Tsung-lung while roaming the terrain of southwestern China, the piece unfolds slowly with deliberate pace, continuously engaging the audience along its path. Set to scores ranging from Taiwanese folk songs to traditional Naxi, to Islamic music, and finally to Tom Waits’ smoky voice, On the Road unites Eastern and Western tradition to convey a powerful artistic message.

CHENG TSUNG-LUNG (CHOREOGRAPHER)
After graduating from the Dance Department of Taipei National University of the Arts, Cheng performed internationally with Cloud Gate Dance Theatre of Taiwan from 2002 to 2004. He served as Resident Choreographer for Cloud Gate 2 from 2006-2010. He is the recipient of the No Ballet International Choreography Competition, the Premio Roma Danza International Choreography Competition in Italy and the Masdanza Choreography Competition in Spain. Cheng was honored as “Artist of 2011” by the Performing Arts Reviews, Taiwan. His productions with Cloud Gate 2 include A Dignified Joke; Change; The Wall; Happiness and Music; Crack; and Blue Hour. Cheng has also choreographed and restaged works for Transitions Dance Company at the Laban Centre(London); Expressions Dance Company (Brisbane); the Hong Kong Academy for Performing Arts; and Focus Dance Company (Taiwan).

LIN HWAI-MIN (FOUNDER / ARTISTIC DIRECTOR)
A writer-turned choreographer, Lin Hwai-min often draws inspiration from Asian cultures and aesthetics to create works with contemporary resonance. He founded Cloud Gate Dance Theatre of Taiwan in 1973 and Cloud Gate 2 in 1999 and is currently the artistic director of both companies. Honoring him with a Lifetime Achievement Award in 2009, the jury of the International Movimentos Dance Prize (Germany) said Lin is “a foremost innovator of dance” and that he “ranks among artists of the century such as William Forsythe, George Balanchine, Birgit Cullberg ….” In July 2013, he received the prestigious Samuel H. Scripps/American Dance Festival Award for Lifetime Achievement. In presenting the award, the Festival noted that Lin is "one of the most dynamic and innovative choreographers today ... his choreographic brilliance continues to push boundaries and redefine the art form.” Previous awardees include Martha Graham, Merce Cunningham, Pina Bausch and William Forsythe. Lin is the first recipient who is based in Asia. He also served as the author for the 2013 International Dance Day Message. Lin Hwai-min has received honorary doctorates from six universities in Taiwan and Hong Kong, the John D. Rockefeller 3rd Award, the Distinguished Artist Award from the International Society for the Performing Arts (ISPA), and the Chevalier of the Order of Arts and Letters from the French Ministry of Culture. Lin has also been celebrated by TIME Magazine as one of Asia's Heroes. As part of the Rolex Mentor and Protégé Arts Initiative, Lin Hwai-min is the mentor of dance for 2012-2013.

CLOUD GATE 2
Cloud Gate 2 was formed in 1999 by Lin Hwai-min with the late Lo Man-fei, a choreographer and former Cloud Gate dancer, as its Founding Artistic Director. Since Lo’s passing in 2006, Lin has acted as company director. Unlike most junior companies, Cloud Gate 2 does not prepare dancers for Cloud Gate; nor does it perform Lin Hwai-min’s choreographies. It showcases talented young dancers in original works by innovative young choreographers. The company’s annual season, Spring Riot, is one of the most anticipated art events in Taiwan. The company’s current repertoire consists of works by Bulareyaung Pagarlava, who has been twice commissioned to create works for the Martha Graham Dance Company, award-winning Huang Yi and Cheng Tsung-lung, as well as Wu Kuo-chu, the late Artistic Director of the Tanztheater at Staastheater Kassel. In addition to its concert performances, Cloud Gate 2 also reaches out to thousands of people through residency programs on campuses and grassroots communities in Taiwan. Cloud Gate 2 made its first international tour in 2012.

THE JOYCE THEATER
The Joyce Theater Foundation, a non-profit organization, has proudly served the dance community and its audiences for three decades. The founders, Cora Cahan and Eliot Feld, acquired and renovated the Elgin Theater in Chelsea, which opened as The Joyce Theater in 1982. The Joyce Theater is named in honor of Joyce Mertz, beloved daughter of LuEsther T. Mertz. It was LuEsther’s clear, undaunted vision and abundant generosity that made it imaginable and ultimately possible to build the theater. One of the only theaters built by dancers for dance, The Joyce Theater has provided an intimate and elegant home for more than 320 domestic and international companies. The Joyce has also commissioned more than 130 new dances since 1992. In 1996, The Joyce created Joyce SoHo, a dance center providing highly subsidized rehearsal and performance space to hundreds of dance artists, as well as special residency opportunities for selected choreographers to support the creation of new work. In 2009, The Joyce opened Dance Art New York (DANY) Studios to provide affordable studios for rehearsals, auditions, classes, and workshops for independent choreographers, non-profit dance companies, and the dance/theater communities. New York City public school students and teachers annually benefit from The Joyce’s Dance Education Program, and adult audiences get closer to dance through pre-engagement Dance Talks and post-performance Dance Chats. The Joyce Theater now features an annual season of approximately 48 weeks with over 340 performances for audiences in excess of 135,000.

The Joyce Theater presents Cloud Gate 2 and the U.S. premiere of On The Road, an evening-length work by Associate Artistic Director Cheng Tsung-lung, from October 2 – 6. The performance schedule is as follows: Wednesday at 7:30pm; Thursday-Saturday at 8pm; Sunday 2pm. Dance Chat, a post-performance discussion with the choreographer and dancers, will take place following the performance on Thursday, October 3. This discussion is free and open to all audience members attending that evening’s performance. Tickets range in price from $10-$39 and can be arranged through JoyceCharge at www.Joyce.org or by calling 212.242.0800. Please note: ticket price is subject to change. The Joyce Theater is located at 175 Eighth Avenue at 19th Street in Chelsea. For more information, please visit www.Joyce.org.
Back
返回頂端
關閉選單
Keywords: 文化部
fb youtube mail