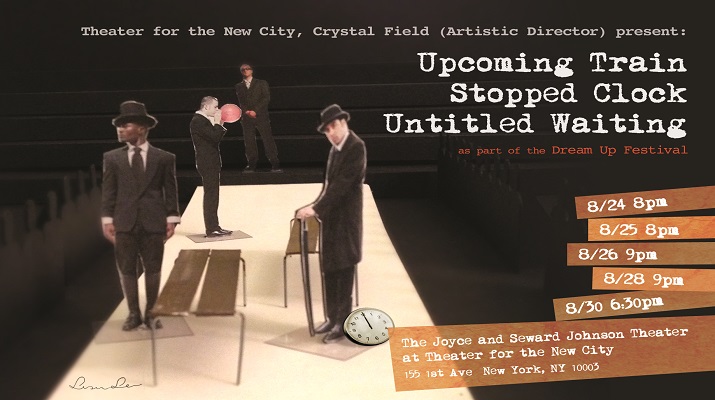 Two actors waiting for the train to come on the platform, but they never really get on any train no matter how many trains have arrived and departed. Not until another two actors take off from the train do they finally realize what they are waiting for is not the train but an answer to the question: what are we anticipating? Invited by the historic Theater for the New City and funded by the Ministry of Culture of Taiwan, Upcoming Train/Stopped Clock/Untitled Waiting, written and directed by Dennis Yueh-Yeh Li, will be presented from August 24th to 30th with five world premiere performances in the 4th Dream Up Festival.

Upcoming Train/Stopped Clock/Untitled Waiting is Dennis Yueh-Yeh Li’s first full production written in New York. His first attempt in New York won the appreciation from Theater for the New City and is invited to stage for the Dream Up Festival.

Upcoming Train/Stopped Clock/Untitled Waiting inspired by Waiting for Godot, is the reflection on society presented in the western classics through the eastern and Buddhist philosophy. This play will examine the absurdity of quotidian life as well as artistic life with an aim to reflect on how “Godot” has affected our lives for the past 60 years, and to go back to the very essence of the ridicule of repetition, time, in order to find another answer for the contemporary society. The meaning of time has to be redefined so that human existence can be scrutinized. Upcoming Train/Stopped Clock/Untitled Waiting is a manifesto of the ritual of waiting, presented by four characters in representation of the general public and artists. It attempts to enact the western classics through the embodiment of the eastern philosophy. From Taiwan to China to Japan to United States, all artists contribute to bring in the eastern philosophical viewpoint to manifest the very essence of this play: other than waiting, will there be any other possibilities that we can manage to create?

Founded in 1971, Theater for the New City, winner for over 42 Village Voice Obie Awards and Pulitzer Prize for Drama, maintains a distinctive commitment to high artistic values and community service. Feeling the need to maintain the commitment and support the New York

theater landscape, Artistic Director Crystal Field thus commenced the inaugural Dream Up Festival in 2010, attempting to discover all the potential theatre artists and help presenting their talents. Upcoming Train/Stopped Clock/Untitled Waiting is the first play produced by a Taiwanese team. 90% of the production team is consisted of Taiwanese artists. Not only Director Dennis Yueh-Yeh Li, 90 % of the production team is consisted of Taiwanese theatre artists. Besides, we also received the assistance from the United States, China, and Japan. With the diverse cultural contributions, we are more capable of managing the intermingling aesthetics from the east and the west,” Producer Mika Yin-Chih Lee states.

Graduated with MA in Performance Studies at NYU Tisch. Dennis Yueh-Yeh Li has worked with many world-renowned artists, such as Robert Wilson’s On the Beach and The Living Theatre’s Here We Are, which were highly acclaimed by the leading press in New York. Besides, Li creates performance arts. His performance art, Kiss Me, So I Am Queer was curated by the leading performance art organization, Chashama to embody the body politics and sexuality. In addition to being as an independent artist, currently Li is the member of The Living Theatre, and the only member from Taiwan for over 65 years since its establishment. Influenced by the aesthetics and the philosophy of The Living Theatre and other independent experimental theaters, Li aims to create performances embodying political issues and power relations to strike a possible revolution.

Venue: The Joyce and Seward Johnson Theater at Theater for the New City (155 1st Ave, between 9th and 10th Street)

For tickets visit www.smarttix.com/ and search for “Untitled Waiting”