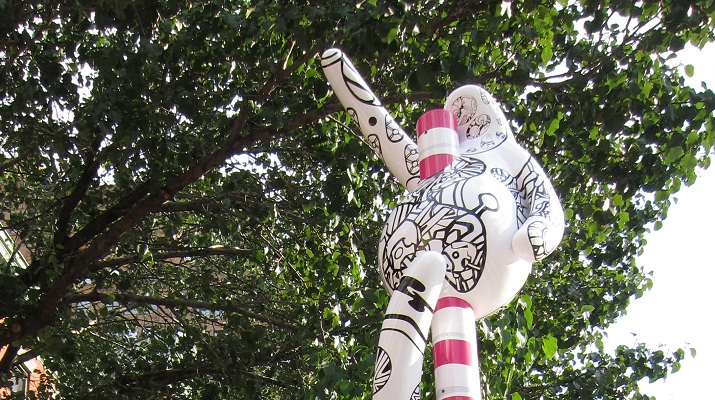 Monkey Magic, continues Tang-Wei Hsu’s use of anime and science fiction-influenced graphics. This totemic sculpture references the ancient South Asian fables Three Monkeys and The Journey to the West as well as Hsu’s own experience in New York where he has lived intermittently for the past three years. Coated with symbols of both landscape and manufacturing, the figures extend into the surrounding bustle, offering brief respite to passersby.

The New York City Department of Transportation launched the Urban Art Program in October 2008 to invigorate the City’s streetscapes with engaging temporary art installations. The Program partners with community organizations and artists to present murals, sculptures, projections, and performances on public property such as plazas, fences, barriers, footbridges, and sidewalks. www.nyc.gov/urbanart

The International Studio & Curatorial Program (ISCP) is a leading nonprofit, residency-based contemporary art institution for emerging to mid-career artists and curators from around the world. Founded in 1994, ISCP has hosted over 1,800 artists and curators from more than 60 countries, including the United States. In 2008, ISCP moved from Manhattan to East Williamsburg, Brooklyn to an 18,000 square-foot former factory building. This move expanded ISCP's facilities to 35 studios, an exhibition gallery and a project space. To advance its core mission of supporting artists in producing and exhibiting a wide range of contemporary, often experimental, artistic approaches, ISCP annually presents a series of innovative exhibitions and public programs both on- and off-site. www.iscp-nyc.org