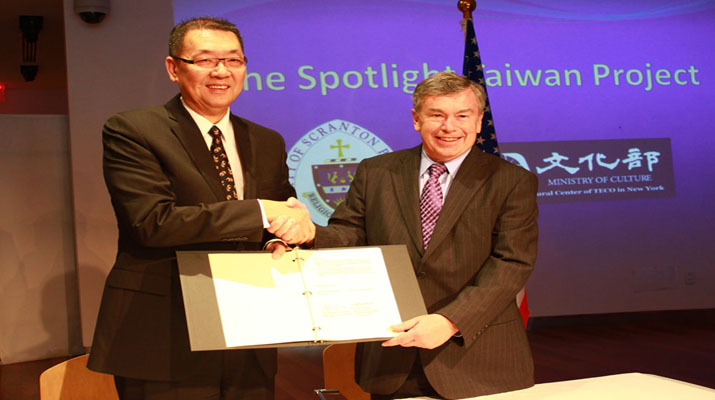 Announced by the Ministry of Culture this January, Mr. Samuel Yen-Liang Ying of Rentex Financial Group expressed his complete agreement with Minister Lung’s idea, “Taiwan has to communicate with the world through culture,” and decided to sponsor the Ministry of Culture 4 million US dollar in sum voluntarily for the “Spotlight Taiwan Project,” from 2013 to 2016, $1 million dollar per year. This project will collaborate with 40 major universities or related institutions around the world to assist Taiwan in initiating exchanges with the global community through culture to fulfill “highlighting Taiwan with culture.” Invited by Taipei Cultural Center, the University of Scranton, approved and funded by the Ministry of Culture under the special project funding program, will launch the project in its first term from September 2013 to August 2014. Today, the Memorandum of Understanding is signed between the two parties by Ambassador Andrew J.C. Kao of Taipei Economic and Cultural Office in New York and Dr. Harold W. Baillie, the Provost and Senior Vice President of Academic Affairs, the University of Scranton, which inaugurates further exchanges between Taiwan and the Scranton community.

Since 2011, Taipei Cultural Center has collaborated with Dr. Ann A. Pang-White, Director of Asian Studies, University of Scranton to organize performances and workshops of Taiwan Bangzi Opera Company and Chai Found Music Workshop, screenings and lectures of Taiwanese Literature Film series, as well as Cheng Chou-Yu’s literature lectures, which have won enormous local success. Director Pang-White will continue to be in charge of the execution of “Spotlight Taiwan Project” with Dr. Baillie’s guidance and the assistance from the offices, such as Public Relations Office, Student Affairs, International Programs and Services, the Schemel Forum, etc.. The first year of this project will focus on “The transformational Tradition.” This October, Taiyuan Puppet Theatre Company will have two performances of A Sea of Puppets, along with a workshop, a lecture, and an exhibition. Next May, there will be the Taiwan Week event with a performance Eastern Legend as well as a workshop, a film screening, and a lecture of Chai Found Music Workshop. In addition, there will be two lectures related to Taiwanese culture. In sum, this project aims to promote Taiwanese culture through performances, exhibitions, lectures, film screenings, and workshops to create positive benefits among Scranton and northeastern Pennsylvania where you will see the flowers of Taiwanese culture blossoming.

“In the Chinese community around the world, Taiwan stands in the place full of critical thoughts, arts, and quotidian aesthetics, and represents a diverse, open-minded civil society,” the Ministry of Culture states. Through the cultural centers overseas and “Taiwan Academy” which in the future will be established one after another around the world, the Ministry of Culture, with the culture as the essence, aims to introduce the cultural feature of Taiwan, “integration of tradition and innovation; combination of classic and modernity,” to the local mainstream in the ways as a sugar cube melted into the water. In addition to the above channels for cultural exchange established by the government, the Ministry of Culture also opens another nonofficial channel to promote “Spotlight Taiwan Project.” With “Taiwanese Contemporary Art” as the subject, the Ministry of Culture attempts to share Taiwanese culture in the perspectives of history, philosophy, mass culture, art, literature, and film through the forms like lectures, artist talks, seminars, workshops, performances, exhibitions, Taiwanese film festivals, and art festivals with an aim to affiliate with 40 major universities or cultural spots around the world to open the window for introducing Taiwan to the local community and promoting the complexity, and the delicacy of Taiwanese culture, the diversity and the open-mindedness the quotidian aesthetics manifests, and the abundant and the liberal thinking values.