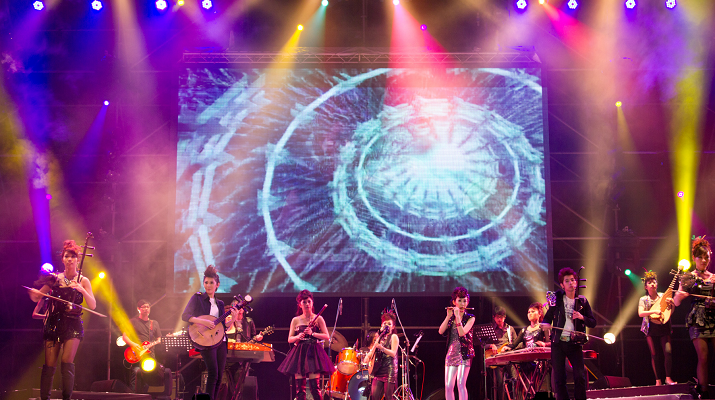 The annual CIBC LunarFest will take place at the Harbourfront Centre, Toronto from February 8th to 10th. With The Sea, The Shark and The Boy by Taiyuan Puppet Theatre Company, the installation art One Kind of Behaviour by the artist Shyu Ruey-Shiann, and the exhibition of the LED undersea-themed lanterns by Pai Jung-Cheng last year, CIBC LunarFest again invites the performing group, Chai Found Music Workshop, and the artisan Lin Jin-Chang with their works from Taiwan. All the audiences are welcome to enjoy their works.

Founded in 1991, Chai Found Music Workshop has been active in the international music circle. Besides the traditional music and Taiwanese music performances, Chai Found is dedicated to creating contemporary music, and has always been invited to perform in Europe and America, which has won them the reputation around the world. Chai Found will have three performances in the Studio Theatre at the Harbourfront Centre. Chai Found’s performance Eastern Legends, comprised of 10 songs played by the traditional Chinese music instruments such as the flute, pipa, huqin, yangqin, guzheng, ruan, and the suona horn, aims to represent the modernity of the traditional music with its energy and glamour. The various 10 songs include Taiwanese folk songs and Chai Found’s new singles. In addition to the traditional eastern music instruments, the background instrumentals will be composed by the instruments for rock ‘n’ roll such as the electric guitars, the drum kit, and the bass, which resonates the Chai Found’s idea of creativity, “innovative with its musicality; creativity rooted in the tradition.”

Following each performance, there will be a demonstration workshop, which allows the audience to experience playing the instruments to impress the idea of the featured music in Taiwanese culture after enjoying the rock ‘n’ roll Chinese music.

Taiwanese artisan Lin Jin-Chang is the expert of the woodcarving. Recently, Lin has been invited to create art works for the lantern festivals in Taipei and Taichung. This year, Lin will present The Lantern Jungle with 6 festive lanterns. During the LunarFest, Lin will also hold 3 demonstrations to teach the public how to create the festive lanterns.

Founded in 2010, CIBC LunarFest is one of the events for Vancouver Winter Olympics in 2010. CIBC LunarFest tours in Toronto and Vancouver during the Lunar New Year every year in hope of representing contemporary image of the Lunar New Year and the multi-culture in Canada, while giving the opportunity for the public of Canada to learn and appreciate cultures different from them. After the tour in Toronto, Chai Found and the six festive lanterns by Mr. Lin Jin-Chang will be presented in the square in front of the Vancouver Art Gallery from February 15th to 17th.