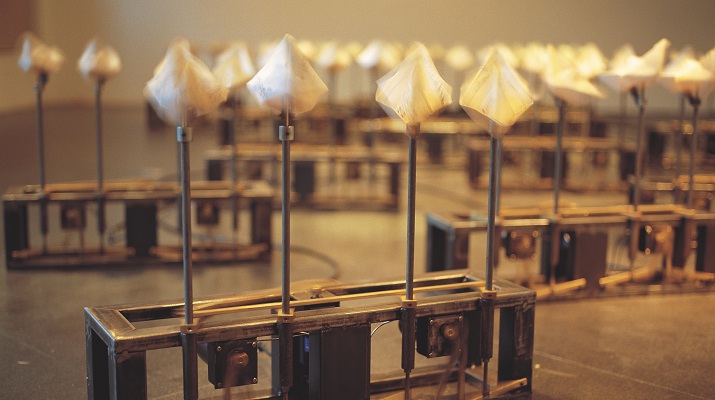 Poetic Rationality, Warm Coldness is an exhibition of three kinetic artworks created in different stages of time by Taiwanese artist, SHYU Ruey Shiann, and they are Life and Death, River of Childhood, and Trace. Through the exhibition, an opportunity is presented to the audience to understand the artist’s creative context and concepts and to get a glimpse of his internal world and his dynamic creative aesthetics.

SHYU is known for his art created with mechanical elements. He uses his hands to turn complex mechanical concepts and installations into simple and concise artistic expressions, as cold hard industrial materials are transformed into abstract and warm three-dimensional sculptures. Binary contrasting relationships, such as rigid/soft, cold/warm, rational/emotional, give SHYU’s art a dynamic and conflicting power that is also touching and poetic at the same time.

The artworks included in this exhibition distinctively represent the artist’s concerns for the nature and our environment and also his nostalgic recollections of childhood memories. With the machines’ slow movements, the artworks resemble old gramophones or time machines that are able to transport us back to beautiful times in the past, as a sense of resonance echoes in life’s shared experiences. Life and Death is the first artwork the audience encounters at the exhibition, and with this simple installation, the artist intends to express the idea that all living beings on Earth are equal and human behaviors have caused drastic ecological changes; before the extinction of more life, please protect and respect the world we all live in. The second artwork, River of Childhood, is an installation of small boats. The electric current guides the audience on an expedition back in time to search for nostalgic memories. While reminiscing the changing sceneries before us, we are prompted to question whether the progression of time has taken away our original hopes and dreams? With the last artwork, Trace, the moving charcoals of the piece appear to be dancing and swinging, and with each stroke and line, traces are left behind as marks of time. Just as time has also inadvertently left its traces in life, from which, an internal landscape of the self is thereby formed.

SHYU Ruey Shiann is one of the important pioneers in Taiwan’s contemporary kinetic art. He uses machines to express emotional burdens and little by little recounts reflections he has for life and nature, as new significance is given to the medium of metal. SHYU gained recognition from the art world in France during the time he spent there in the 90’s. In 1997, he was the first place recipient of the French National Senior Diploma in plastic expressions. In the recent years, he is frequently invited to participate in international exhibitions, including Kinetica Art Fair in Ambika, London, Lunarfest in Harbour Front Centre, Toronto, and Tenri Cultural Institute, New York. In 2012, SHYU was invited to present his solo exhibition, Distant Rainbow, at Taipei Fine Arts Museum, which received many positive critical reviews.