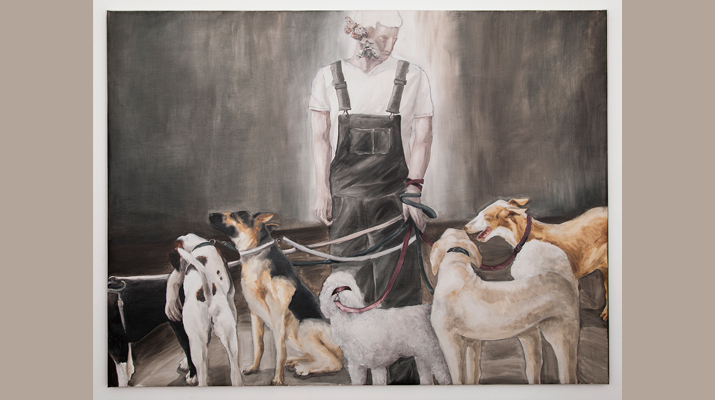 The Ministry of Culture, Taipei Cultural Center of TECO in New York is glad to announce that Taiwanese artist, Yinling Hsu and Chun-Yi Chang will participate New York ISCP Fall Open Studios from November 8th to 9th, 2014. It will hold a private VIP hour to launch Open Studios on Friday, November 7th, from 6-9pm. ISCP is one of artists-in-residency programs that are sponsored by the Ministry of Culture of Taiwan, R.O.C. regularly to create a cultural exchange opportunities for Taiwanese artists and curators.

Artist, Yinling Hsu
Yinling Hsu (born 1987 in Pingtung, Taiwan) currently lives and works in Taipei, Taiwan. In 2013 she graduated from Taipei National University of the Arts, Taipei and earned a Master of Fine Arts in painting. Recent solo exhibitions include Dr. Sleep and Gourmet Drama, at Project Fulfill Art Space, Taipei Taiwan. Working with Riverbed Theatre, she does visual design for the performances of Das Rheingold and Six Feet Under-Ten Feet Above and show at Huashan 1914 Creative Park, Elite Gallery and National Taiwan Museum of Fine Arts. Group exhibitions include Lights of Women, at Geumnam-ro Gallery of Gwangju Museum of Arts in Korea and Circuit, Gallery EXIT in HK.

Yinling Hsu’s works focus on behavior and mental state of human. She often creates a role and observes the world from that role’s point of view. In her paintings, no matter how weird the people or illogical space she depicts, she tries to convey a message—human being could not survive without playing different roles. It is unavoidable and also shows human being’s real desire. Ironically, plays of roles construct the world. She always hopes to express this kind of established connection through paintings because these invisible scenes are usually the reality that is concealed.

For the ISCP Fall Open Studios, Yinling Hsu has created the new paintings titled”All Happy Returns”. In the painting she creates a character－a taxidermist who has no emotion and cannot develop sense of belonging via love or relationship. The only one way for him to arouse emotion and illustrate relationship is to collect and arrange people’s dead bodies recognizing their expression patterns. It’s a self-educated of human nature for himself.

Artist, Chun-Yi Chang
Chun-Yi Chang, a Taiwan artist who currently inhabited in Paris. She was honored with highest recognition for her study at both Rouen College of the Arts and the University of Paris Sorbonne, institute of Aesthetics and Art Sciences where she obtained her Master’s Degree and Ph.D. In 2013, Chang was awarded a scholarship by the Gerda Henkel Stiftung and la foundation Maison des science de l’homme while she was a Postdoctoral fellow at Collège d’études mondiales de la Fondation Maison des sciences de l’homme (FMSH) where she specializes in the research of contemporary art practice and theory. Chang’s participation in important exhibitions in France include : “Biennale of Young Artists”, 5th et 11th White Night (la Nuit Blanche), E-magicians : European Meeting of Young Digital Creation ; She was invited to exhibit at the Museum of Fine Arts in Rouen, Today Art Museum in Beijing, Chinese European Art Center in Xia- Men and French Cultural Center in Phnom Penh.

In recent years, hers works concerns the authenticity of the transparency within digital images of video and photography. She aims at rendering the coexistence of the eternal and the ever-changing by alternating motion and motionless scenes, and oftentimes reorganizes the different facets of a single phenomenon into plausible events which are in fact aberrations of normality. The works exhibit in the ISCP’s Open Studio, the "Fairy’s Lake", a video and photography series stems from the hide and seek game around the lake : The sparkling, somewhat unreal light of a blue sky, veiled by tree branches and leaves, conjures up a mirage, a reflection of the Mare aux Fées at Fontainebleau. It breaks the surface of the water, from which the forest, but partly revealed, emerges…The story has been set in motion by a game of hide-and-seek. What happens before the little girl who is "it" has finished counting ? The patter of feet having faded off to the four corners of the forest, the little girl, seemingly alone onstage, suddenly draws furtive gazes from the hidden players. It is these furtive gazes that serve as the starting point for Mare aux Fées. In this series of videos and photographs, "hiding" and "seeking", the two actions of the game, no longer combine to weave a singular event that gives rise to a linear temporality. Instead, they form a procession phenomenon, which proves multiple when viewed from multiple perspectives. Thus these phenomena, along with other phenomenal fragments relating to the same event, lay down a temporal axis of their own, and set forth another temporal dimension. It is as if certain moments were deviating from the time of our everyday experience, the time in which the game of hide-and-seek actually plays out. These moments in flight are henceforth separate from the temporal flow that courses headlong toward future; theirs is a strange flow, with no clear beginning or end. The series makes use of the “figure of time”: that is, the form-phenomenon of time (the term harks back to the Chinese word Xiang, 象, which means both “form” and “phenomenon”). A priori, the form-phenomenon seems close to reality, but it is in fact separate. The aural and visual phenomenal details revealed at every instant—whether the tremulous shade of leaves set astir, or the sound of the rustling wind, or the little girls' intermittent voice as she proceeds with her sometimes dubious count, or her gestures and stance and motions—grab our attention, and we forget to ask, "What is going on?" In this way Mare aux Fées puts the originating event in quotation marks and invites us to live fully in the moment.