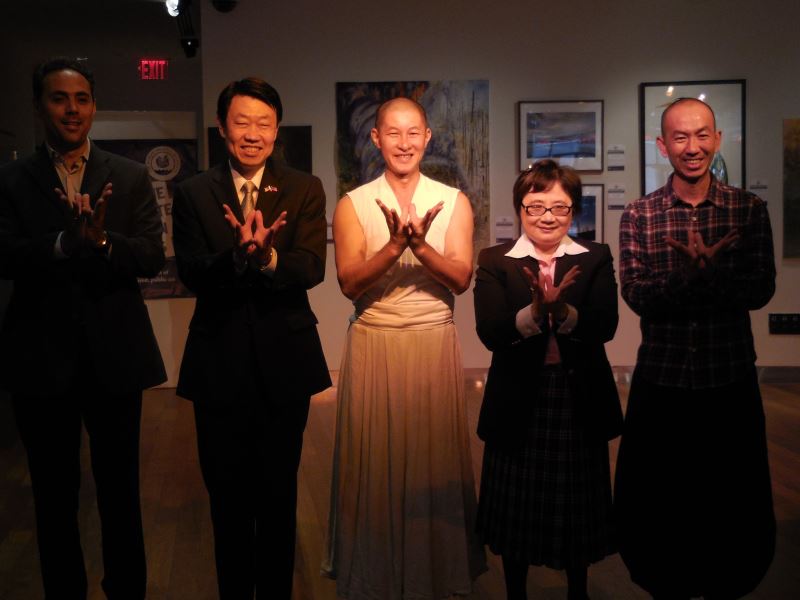 After celebrating the 25th anniversary in 2013, U-Theatre is returning to the stages of North America with its featured works “Sword of Wisdom” & “Sound of the Ocean”. This 2014 tour is organized by FAS Arts Management, and is made possible with the support by the Ministry of Culture, the Ministry of Foreign Affairs, Overseas Community Affairs Council in Taiwan, and Taipei Cultural Center of TECO in New York.

The work “Sword of Wisdom” conveys the power of solidity and tranquility. It is about the path the hero Brave One must take in his practice of moral teachings. He faces the unknowns of life, which result in fear, and this leads him to begin the search for wisdom. By holding on the sword, the Brave One sees his own weakness, yet he also finds the courage needed to confront life.

Using the Brave One with a sword as an icon, U-Theatre selected chapters that best fit this theme from its classic repertory of “Meeting with Bodhisattva” and “Beyond Time”. The most prominent feature of “Sword of Wisdom” is the sounds of wooden and metal percussion that are added to the sound of drumming. Together with Gurdjieff Movements (the sacred dance), famous for its precision in movement, U-Theatre presents a higher level of drumming as an art.

In U-Theatre’s repertoire, the relationship of the individual to the whole community – and by extension, of the group to its audiences worldwide – is portrayed without explicit narrative or the creation of imagined characters. The result is a fascinating and unique mode of contemporary theatre that is process-based, finely-tuned, and performer -dependent. It is grounded in a collective experience based on each member’s personal search for enlightenment and inner balance.

Coming from Taiwan, U-Theatre has toured North America for several times since 2003, visiting venues including the Next Wave Festival (NYC), White Birds Dance Festival (Portland), Winter Olympics Vancouver, UC Berkeley, Towson University, and etc. The New York Times has described their performance as “A great and complex beauty to the drumming, sounds, and silence…” And Taiwan Review has depicted that "...their bodies act out a language both religious and artistic, as the drums and gongs rattle the hearts of the audience."