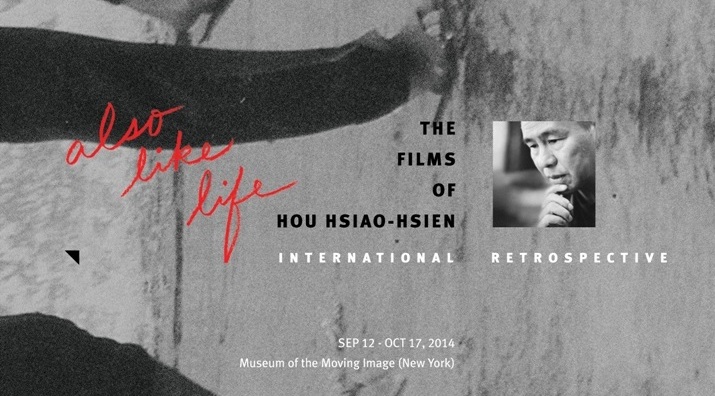 Taipei Cultural Center in New York is pleased to announce its first collaboration with the prestigious Museum of Moving Images to host the first comprehensive internationally-touring retrospective, "Also Like Life: The Films of Hou Hsiao-hsien." All of this master's works will be screened, starting from Sept. 12 to Oct. 17.

Hou Hsiao-hsien, the leading figure of the Taiwanese New Wave, is one of the most important and influential filmmakers to emerge over the past three decades. His sensuous, richly textured work, marked by elegantly staged long takes, largely static camera positions, and a radically elliptical approach to storytelling, is instantly recognizable in such widely acclaimed movies as Flowers of Shanghai, The Puppetmaster, Café Lumière, A City of Sadness, Dust in the Wind, and Flight of the Red Balloon. The retrospective Also like Life: The Films of Hou Hsiao-hsien includes all of Hou’s seventeen feature films as director, all shown on film (including new 35mm prints). The series will also include short films directed by Hou Hsiao-hsien, and a sidebar program of related films including Olivier Assayas’s intimate documentary HHH: A Portrait of Hou Hsiao-hsien, Edward Yang’s seminal Taipei Story (starring, and co-written by, Hou), and more.

This internationally touring retrospective is supported by Taipei Cutural Center, NY) and the Ministry of Culture of the Republic of China (Taiwan) and organized by Richard I. Suchenski (Director, Center for Moving Image Arts at Bard College). The book Hou Hsiao-hsien (Vienna: Österreichisches Filmmuseum and New York: Columbia University Press, 2014) is released in conjunction with this retrospective.
Back
返回頂端
關閉選單
Keywords: 文化部
fb youtube mail