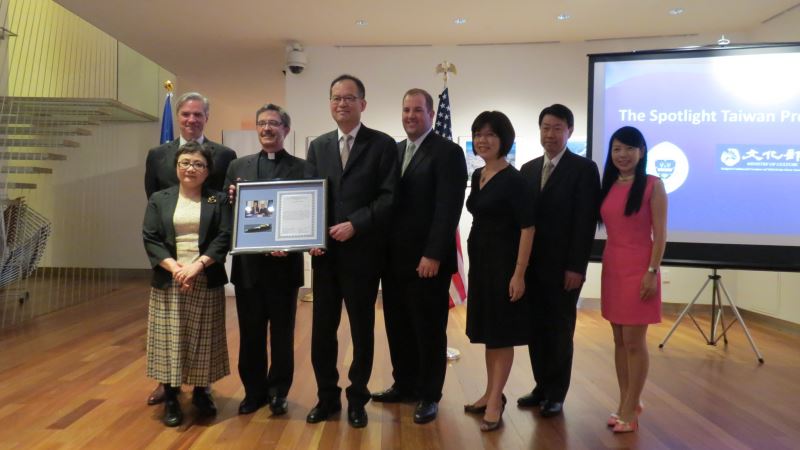 Spotlight Taiwan, a project initiated by Taiwan’s Ministry of Culture, will bring a variety of Taiwanese culture to college campuses and local schools. Collaboration between the University of Scranton and the government of the Republic of China (Taiwan) under this competitive grant will launch its second year project in the 2014-15 academic years to bring a taste of Taiwanese culture to the northeastern Pennsylvania and Scranton area.

On August 19th the President of the University of Scranton, Fr. Kevin P. Quinn, S.J. and Director General Paul Wen-Liang Chang of Taipei Economic and Cultural Office in New York signed the Memorandum of Understanding to launch a $100,000 project for the University of Scranton. The 12-month collaboration will bring unique film screenings, lectures, seminars, workshops, and performances to the area. The internationally acclaimed Taipei Folk Dance Theater will be invited to perform and to conduct a master class and a workshop in March 2015.

This past academic year under the Spotlight Taiwan project, The University of Scranton organized a series of multi-platform cultural events under the theme “Traditions in Transition,” including performances like “A Sea of Puppets” by Taiyuan Puppet Theater Company and “Eastern Legends” concert by Chai Found Music Workshop, workshops, lectures, and seminars. In May 2014, the government of the Republic of China (Taiwan) donated the renowned Kinman Peace Bell to the University, which further cemented mutual friendship and future initiatives.

“This is an opportunity for Taiwan to connect with the world through our culture,” said Lung Ying-tai, Taiwan’s minister of culture. The Spotlight Taiwan project, with Taiwanese contemporary art as its subject, is an effort to share Taiwanese perspectives of history, philosophy, mass culture, art, literature, and film through such forms as lectures, artist talks, seminars, workshops, performances, exhibitions, Taiwanese film festivals, and art festivals. This project, sponsored by Samuel Yen-Liang Ying, leader of Ruentex Financial Group, has worked in collaboration with 40 major universities and related institutions around the world to highlight the artistry and richness of Taiwanese culture.

“Taiwan, as a diverse, open-minded civil society, is a place rich in critical thought and the arts, with a deep appreciation for the beauty of everyday life,” said Minister Lung. Through overseas cultural centers and “Taiwan Academies” that will be established in locations around the world, the Ministry of Culture plans to introduce to communities the Taiwanese ability to integrate tradition and innovation, and combine the classic with the modern. “Our culture will be introduced to the local mainstream,” said Minister Lung, "much as a sugar cube melts into water.”