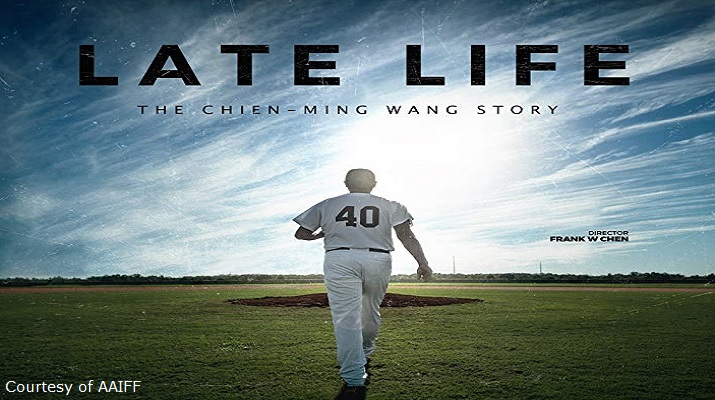 The Taipei Cultural Center in New York is pleased to announce a continued partnership with the 41st Asian American International Film Festival (AAIFF) to present a special screening of the documentary following one of the most renowned Taiwanese baseball pitchers Chien-Ming Wang and a powerful lineup of short films from Taiwan.

This year, the centerpiece presentation will be the N.Y. premiere of Frank W. Chen’s remarkable documentary Late Life: The Chien-Ming Wang Story. Four years in the making, this intimate portrait explores the former Yankees ace Chien-Ming Wang’s comeback attempts with inner struggles and challenges following his professional baseball career derailed by shoulder surgery and other injuries. Chieh-Ming Wang, director Frank Chen, and producer Brian Yang will be in attendance for a post-screening Q&A and a reception on July 29.

This year’s festival will also present five short films showcasing the vitality and compelling storytelling of Taiwanese filmmaking community. Titles include Ying Liang’s semi-autobiographical short, I Have Nothing to Say, whose feature length narrative A Family Tour was just selected in competition at the Locarno Film Festival. Other shorts include Albert Ventura’s Iphigenia’s Night, Chung-wei Huang’s Midnight Carnival, Chen-chieh Hsu’s Guo Mie, and Yung-shiuan Yang’s Stories about Him, the winner of Taipei Film Awards 2017 for the best animation.

As the first and longest running Asian film festival in the U.S., the AAIFF is devoted to films by and about Asians and Asian Americans. The 41st annual festival will take place from July 25 to August 4 at Cinema Village East (181-189 2nd Avenue) and Asia Society (725 Park Avenue). For full lineup and schedule please visit aaiff.org/2018

Chien-Ming Wang was a supernova in Taiwan. His success as the ace of the New York Yankees rocketed him to a cult-like status on the island nation. We find Wang now at age 35, bouncing around the Independent and Minor Leagues, a fallen icon. The film delves into his comeback attempts, his life between endless rehab programs, his lengthy and often lonely stints away from home and family, and the inner struggles and weight he carries on his injured shoulders. LATE LIFE: THE CHIEN-MING WANG STORY tracks the extraordinary journey of an ordinary man—of someone who fell from the top and fights his way back up again.

While driving home from the airport at night, Jie is forced by a policeman onto a smaller local road where he accidentally hits a stranger running in the opposite direction. Jie discovers that the victim is blindfolded, dressed in an ancient Greek mask, and has a string protruding from his mouth. Possessed by curiosity, Jie pulls the string and discovers a message: “Open the black box in your suitcase.” A simple choice will turn this routine night into his worst nightmare.

Andrea Lin is a confused Taiwanese girl struggling to find her place in the world. In search of the adventure that is missing from her life, she takes a summer job in America working for a traveling carnival, where she is confronted with the harsh realities of life as a migrant worker. After struggling to connect with her carny co-workers, including Julio, a young, free-spirited Mexican man, she must come to terms with her feelings of wanting to belong, yet never feeling at home. This story is dedicated to the people who foolishly yet admirably continue to chase their dreams, against all odds.

A Chinese mother gets a home visit from the police because her daughter, a dissident filmmaker living in Hong Kong, is planning yet another critical film about China. She hasn’t seen her daughter for five years but sets off to talk to her, in spite of her failing health. Based on director Ying Liang’s personal experience of living in exile, I HAVE NOTHING TO SAY is a combined examination of politics and family tragedy.

In GUO MIE, a karaoke-addicted old woman struggles with her sense of self-worth at her estranged husband’s funeral where she encounters his younger and more sophisticated girlfriend, and finds out that her kids might have secretly been in touch with her late husband all these years. Imbued with elements of Edward Yang and Yasujiro Ozu, GUO MIE is a delicate, emotional ode to family.

Stories about Him
Wednesday, Aug 1, 6:00pm
Dir. Yung-shiuan Yang / 13 min / Animation / East Coast Premiere
In this artfully pieced together short, Yung Shiuan Yang mixes a wide range of techniques from collage, glass painting, and animation to tell the whimsical story of her grandfather. Her relatives say that he was a gold miner, a trainee, a businessman, and a hero. The stories they tell her are almost too difficult to imagine. Are these tales all real? Who on earth is he?