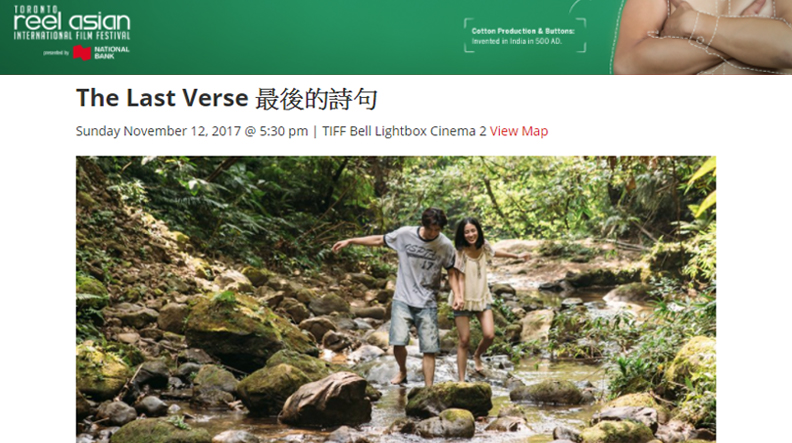 Taking place from Nov 9 through 18, the Toronto Reel Asian International Film Festival returns for its 21st edition with an eclectic mix of Taiwanese films including the award-winning THE LAST VERSE by Tseng Ying-ting and MY DEAR ART, a documentary on art collecting by Hsu Hao-hsuan, plus “Pulse of Taiwan”-four award-winning short films about family relationships and finding love in the age of artificial intelligence.

As an official selection of 2017 Busan International Film Festival, THE LAST VERSE has won the Best Actress, Best Actor in a TV Movie category, 2017 Golden Bell Awards in Taiwan. Set against the subtle backdrop of the elections and government politics of Taiwan from the early 2000s onward, THE LAST VERSE tracks in human terms real estate bubbles, political corruption, market liberalization, and dwindling spirits. This melodrama will make its North American premiere on Nov 12 with the director Tseng Ying-ting and the leading actor Fu Meng-po in person.

Directed by the rising talent Hsu Hao-hsuan, MY DEAR ART is a documentary featuring interviews with artists, gallerists and art collectors who share their views on art collecting, which allows behind-the-scenes access to the art collection world and the introduction of numerous contemporary Asian artists. This film was selected as the opening documentary at 2017 Art Basel Hong Kong, one of Asia’s most important international art fairs.

In a special collaboration with the Kaohsiung Film Festival, this year Reel Asian presents “the Pulse of Taiwan,” an inaugural program showcasing four award-winning short films selected from Kaohsiung Film Festival. They are LOVE AFTER TIME by Tsai Tsung-han, THE BOSS by Evan Wu, 100th BIRTHDAY WISH by Lien Chien-hung and BABES’NOT ALONE by Lee Yi-shan, all of which will be presented on Nov 13.

Founded in 1997, the Toronto Reel Asian International Film Festival is a unique showcase of contemporary Asian cinema and work from the Asian diaspora. This year’s festival, running from November 9 to 18, will open with Yukiko Mishima’s moving family drama DEAR ETRANGER and will close with STAND UP MAN, a Korean Canadian comedy by Toronto-based filmmaker Aram Collier. For more information, visit http://www.reelasian.com/festival/

*With Dir. Tseng Ying-ting and the leading actor Fu Meng-po in person