Home
EVENT
Martial Law and After: Reflection of the 30th Anniversary of the End of the Martial Law in Taiwan Cinema
AAA
FB email 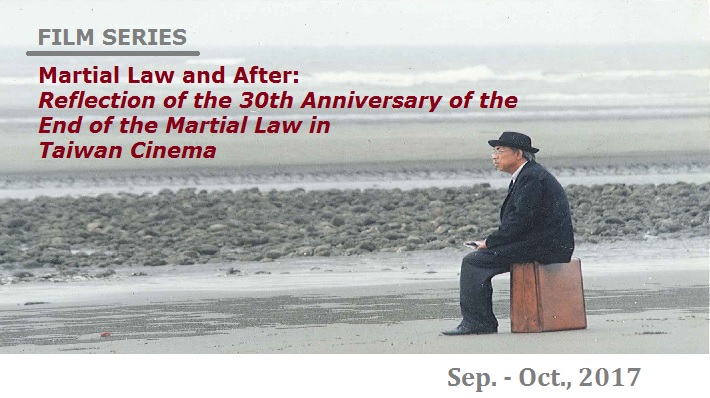 The full impact of Martial Law was not immediately felt in Taiwan after its lifting in 1987. To some Taiwanese, especially those whose loved ones and family members had been jailed, killed, or simply disappeared, the 40-plus years of living under Martial Law was like a nightmare. Their only hope was daybreak, when they could finally wake up and leave the nightmare behind.

However, the repression and abuse people suffered under Martial Law lingers on those who survived, and only after a number of years can they vent their emotions and express the anguish and the suffering they endured during the era through cinema.

This category of films includes ones directly confronting the taboo issue of the February 28th Incident, such as City of Sadness, but there are even more films about those who were deeply wounded in body and soul. Some of the survivors can still feel the pain today.

This year marks the 30th anniversary of the lifting of Martial Law and Taiwan’s march toward democracy. Now is the right time to reveal “those who were left” and "those who come later" in films. Films chosen for this program cover the past three decades of Taiwan cinema and reflect upon those whose lives are directly or indirectly affected by the Martial Law and its passing. They include: Chinese veterans stranded in Taiwan after 1949, political prisoners of the White Terror period in the 1950s, aboriginals working in the big city, and progressive students participating in social movements, to name a few. The films draw from a spectrum of different groups of people living in Taiwan. At the same time, their lives represent another turbulent era as Taiwan transitioned into a democratic and globalized nation. The films listed below address this issue.

Ma Le, a young aboriginal man, came to Taipei alone to earn a living on construction sites. However, unable to bear the exploitation, Ma Le accidentally killed a site superintendent and was sentenced to death. A-Te, a taxi driver used to be a social movement fanatic, gave Ma Le a ride in his taxi on the night that Ma Le committed the killing and their two fates were thereafter intertwined.

Panay worked in the city as a journalist. One day, she found her tribe had been overdeveloped and changed by tourism. They were losing their land and their culture, so she decided to return home to bring back the abandon terrace. In this process, she found it's not only about the land, but also about who she really is.

*Followed by a talk on "Minorities' Self-representation and Identity Construction: Indigenous People as a Case Study" by curators, moderated by Ying Qian, Assistant Professor of Dept. of East Asian Languages and Cultures, Columbia University

Suspected of being a leftist, KO spent around 30 years in prison and institutions, always obsessively worrying about the fate of his best friend CHEN executed in the 1950s. Soon after his release, KO goes in search of the truth and a part of himself. Only when he learns the truth is he able to pay his respects.

*Followed by a conversation with the director and curators, moderated by Stephen Field, Professor of Chinese Department of Modern Languages and Literatures, Trinity University

*Followed by a Q & A with the director and cuartors

A 17-year-old high school girl, TIAN Meng-Shu, falls in love with a Japanese-educated physician, TIAN Chao-Ming, who is 16 years her senior. Little did the fearless young lady know that their lives over the next 60 years would closely follow the thread of Taiwan's post-World War II political history. The couple bravely face insurmountable obstacles to fight for Taiwan's democratic and human rights movements under Martial Law.

*Followed by a Q & A with the curators

"Door Latch" and his friend followed the KMT army and moved to Taiwan in 1949. They concealed their real name and got many trials and afflictions to adapt the circumstances in that special situation. Even though there are a lot of embarrassing situations and he suffers many difficulties, Door Latch survives. However, bigger secrets will unfold.

*Preceded by a talk on "Historiographies of Home in Wang Tong's Cinema, Before and After the Lifting of the Martial Laws" by Guo-Juin Hong, Associate Professor of Dept. of Asian and Middle Eastern Studies, Duke University; followed by a Q & A moderated by Liana Chen, Assistant Professor of Dept. of East Asian Languages and Literatures, George Washington University

In the late 1980s, three rebellious high school students see their adolescent antics turn into unrequited love. When they leave their hometown to pursue their lifelong dreams in the big city, their relationships start to face the pressures of real life as the Taiwanese sociopolitical reformation movement unfolds around them and Martial Law is explosively lifted.

After his father’s death, 10-year-old Xiang is sent to live with his mother and a stepfather he barely knows. However, a lurking threat of unspoken violence surrounds him in his new home. One night, Xiang dreams of his elder brother who went missing, his subconscious gradually bringing to light a startling secret revealed in his drawings.

Paradise in Service follows the adventure of a boy, Pao, who serves his military service in Unit 831 from 1969 to 1972, in preparation for a war that could erupt anytime. Pao is assigned to the Sea Dragon (ARB), a unit noted for the toughest physical training. However, that the greatest challenge in his military service lies not in the Sea Dragon but in Unit 831, a special task he is later appointed to…