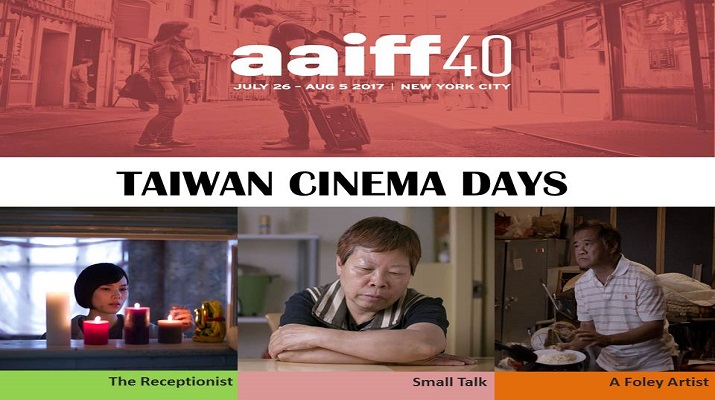 Taipei Cultural Center in New York is thrilled to announce that the 40th Asian American International Film Festival will present TAIWAN CINEMA DAYS by showcasing 3 compelling Taiwanese films of the year including SMALL TALK by Hui-chen Huang, THE RECEIPTIONIST by Jenny Lu, and A FOLEY ARTIST by Wan-jo Wang with the filmmakers in person.

SMALL TALK, an autobiographical documentary executive produced by the film amateur Hou Hsiao-Hsien, is selected as the centerpiece presentation of this year’s AAIFF and will have its NY premiere screening on July 29th at Asia Society after having received 2017 Berlinale Teddy Award for the best documentary this February.

TAIWAN CINEMA DAYS also highlights two works of Taiwan’s rising talents: A FOLEY ARTIST and THE RECEPTIONIST. Directed by Wan-jo Wang, A FOLEY ARTIST is the first documentary about the history of sound-production in Taiwanese films by telling the story of professional Foley artist Hu Ding-Yi, who recreates sound in wildly creative ways and gives life and energy to a film.

Inspired by true events, Jenny Lu’s debut feature THE RECEPTIONIST depicts the secret lives of the employees and clients of an illegal massage parlor in London through the eyes of a foreign graduate who lands a job as a receptionist and stumbles across startling discoveries there.

Screening Schedule:
★ All screenings will be followed by the Q&A with DIRECTOR IN PERSON

SMALL TALK is directed by Taiwanese filmmaker, Hui-chen Huang. Hui-chen knows her mother is a lesbian, but just about nothing else about her. They have lived like strangers under one roof for decades, and almost never talk to each other. One day Hui-chen finally summons up the courage to sit her down and make her mother talk. But is she ready to hear what she has to say?

THE RECEPTIONIST tells the story of a Taiwanese graduate named Tina who is struggling to find work in London. After landing a job as a receptionist at an illegal massage parlor, Tina finds herself caught up in a world of secrets and mistreatment as the owners’ and employees’ lives begin unraveling before her eyes.

From the story of a professional Foley artist, Mr. Hu Ding-Yi, to trace the history of sound-production in Taiwanese films, while extends to a broader view of the entire Chinese-speaking film industry.