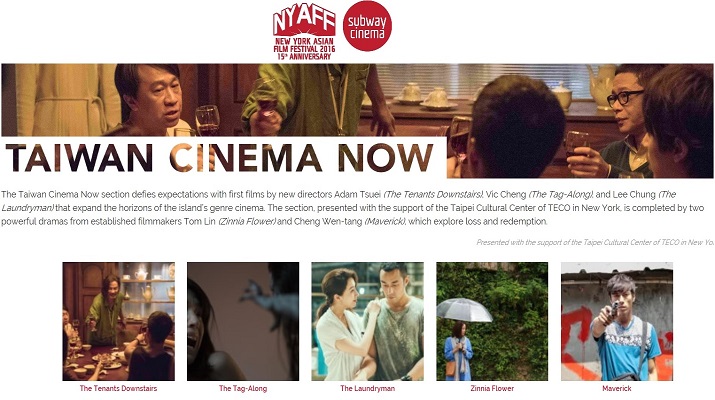 The Taiwan Cinema Now section defies expectations with first films by new directors Adam Tsuei (The Tenants Downstairs), Vic Cheng (The Tag-Along), and Lee Chung (The Laundryman) that expand the horizons of the island’s genre cinema. The section, presented with the support of the Taipei Cultural Center of TECO in New York, is completed by two powerful dramas from established filmmakers Tom Lin (Zinnia Flower) and Cheng Wen-tang (Maverick), which explore loss and redemption.

Lee Chung’s poppy feature debut throws the horror-comedy and the action film into a blender and creates a fun-filled cocktail fueled by manic energy, actors playing against type, and absolutely stunning imagery. Joseph Chang stars as the laundryman, a nameless hit man who kills people at the orders of A-gu (Sui Tang) and brings the bodies back to A-gu’s laundromat at night for processing. Plagued by the ghosts of his victims, he seeks help from Lin (Wan Qian), a cynical psychic who becomes a vessel to air their grievances and desire for revenge. Hot on his trail is Yang (Yeo Yann Yann), a police detective determined to stop the tide of violence left in his wake. Blackly funny, and with some amazing cinematography and crazy fight choreography, The Laundryman is a fun and viscerally entertaining ride.

What chance does a rookie cop have in a corrupt world? Yeh (Chris Wang) is a recent transferee who is assigned to a group trying to take down a gambling den. When inside, they find a city councilman’s son Black Monkey (Huang Teng-hui) high as a kite and essentially bulletproof from any legal action. Headstrong and unable to handle the corruption he sees around him, Yeh keeps picking at the case despite warnings. He recruits veteran police officer Ming (Chuang Kai-Hsun) to his cause, but he turns out to have issues of his own, and is trying to pay off the debt the brother of his bar-hostess girlfriend Ann (Jian Man-Shu) owes to loan sharks. Money and power corrupt absolutely, but maybe there is a chance that Yeh’s innocence will allow different choices to be made. Strong performances from the lead actors, an effective love story between Ann and Ming that gives the film a heart, and an unusual (for the genre anyway) sense of optimism elevate Maverick as one of the most impressive Taiwanese films we watched this year.

Inspired by an eerie video that became an Internet sensation, The Tag-Along emerged out of nowhere to become one of the most popular horror films in Taiwanese history. In the viral video, a ghostly young girl in red can be seen following a group of hikers up a mountain path, shortly before the hikers meet with disaster. Is this a sighting of a mo-sien, a mountain demon who preys on fear? Cheng Wei-hao’s feature debut lulls the audience with a setup taken straight from the rom-com playbook: Wei is a young real-estate broker who works too much and can’t convince his quirky girlfriend to get married. But things take a dark turn when Wei’s grandmother disappears, and the only evidence is the girl in red who mysteriously appears on the surveillance footage. The Tag-Along jolts your heart with the requisite frights and starts, but it also taps into your head by revealing the devastating regret that can result from taking loved ones for granted.

Death is at the heart of every human fear, but who among us would not rather die ourselves than grieve for a loved one? Made by director Tom Lin in the wake of his wife’s death in 2012, Zinnia Flower follows two strangers who are devastated by unthinkable loss after a deadly car accident: Ming (the extraordinary Karena Lam) was days away from marrying her fiancé when he was killed in the crash, while Wei (a startling Shih Chin-Hang, aka Stone, lead guitarist of the rock band Mayday) loses his pregnant wife. As they each struggle in very different ways to repair their shattered hearts, they are united by the Buddhist mourning process, which brings them together every seven days to chant and pray for the soul of the deceased. By the time the meaning of the film’s title becomes apparent, you’ll be wiping away the tears.

The most hotly anticipated Taiwanese film of the year is a lurid fantasy of wounded flesh and accursed lives that entwine and separate in a building run by a landlord (Simon Lam), who seeks to find a particular type of tenant for the property he inherits from his relatives. Driven by his desire of peeping into the darkest aspects of human nature, what he sees through the eyes of the omnipresent cameras ain’t pretty… but it gives him the wry, abject satisfaction of a dark god lording over and leering at the souls of the damned, his imagination hungering toward them. A devil-like figure, he patiently tends to the needs of a barbecue pit of deranged tenants: a gymnastics teacher with a record of domestic abuse; a shut-in college student who spends his days and nights in front of his computer screen; a sexually frustrated single father and his innocent young daughter; a mysterious ghostly girl in white; a gay couple trying to hide their relationship; and a sexy office worker who loses herself in an endless spiral of seedy love affairs. Violence and perverse desires come together in a writhing narrative based on a controversial book by writer (and previous NYAFF guest) Giddens Ko, recalling the golden age of Category III in the sweaty confines of a Taiwanese cinematic form.