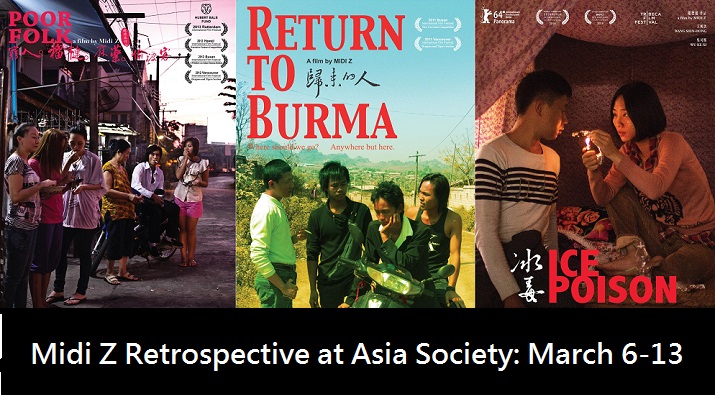 Taipei Cultural Center in New York is delighted to announce its collaboration with Asia Society to present “Homecoming Myanmar: A Midi Z Retrospective” between March 6-13.

A rising talent in international cinema, Myanmar-born and Taiwan-based Midi Z has developed a signature style for his intimate and authentic portraits of people struggling with displacement and poverty on the margins of Myanmar society. Hailing from an ethnic Chinese family in Lashio, a small town in the eastern Shan state, Z draws inspiration from the people he is familiar with in this remote region with a porous border next door to China, Laos, and Thailand. Driven by social and economic hardship, they make ends meet drifting in-between worlds where smuggling and human and drug trafficking are rampant. Compassion and a documentary impulse guide Z’s camera as it quietly observes his characters’ actions and choices in a nonjudgmental manner. Mostly shot guerrilla-style in Myanmar, without official permission, the films also demonstrate formal rigor through meticulously crafted narrative structure and camerawork. This first U.S. survey of Z's work includes all of the director's fiction features plus a short. All films with English subtitles.

Midi Z. 2014. Taiwan/Myanmar. 95 min. DCP.
Cast: Wang Shin-Hong, Wu Ke-Xi
Post-screening Q&A with director Midi Z and actress Wu Ke-Xi. Followed by a reception.
Xing-hong, a young farmer, can barely scrape by tending to the land with his father. Together, they visit one relative after another to borrow money to buy a moped so that Xing-hong can work driving passengers. One of his first customers is Sanmei, a woman who has returned home from China to Lashio, in northern Myanmar, to bury her grandfather. She hopes to earn enough money in order to bring her son in China to join her. In this part of Myanmar, few are untouched by the lucrative and menacing drug trade. When Sanmei and Xing-hong meet, a business deal is struck.

Midi Z. 2011. Taiwan/Myanmar. 84 min. DCP.
Cast: Wang Shin-Hong, Lu Jiun
Post-screening Q&A with director Midi Z and actress Wu Ke-Xi.
Myanmar holds its first parliamentary election in two decades. Many Myanmar natives living overseas return home in anticipation of peace and prosperity. Xing-hong, who has worked as a construction worker in Taiwan, arrives home to find his brother getting ready to go to work as a laborer in Malaysia. As he looks without much luck for business opportunities in his hometown, a sense of disillusionment and alienation pervades. It seems as though nothing much, after all, has changed. Midi Z’s directorial debut feature, Return to Burma symbolizes the filmmaker’s personal homecoming in 2008, ten years after he moved to Taiwan to pursue an education and career.

Preceded by short film
The Palace on the Sea
Midi Z. 2014. Taiwan/Myanmar. 15 min. DCP.
Cast: Wu Ke-Xi, Wang Shin-Hong
“The Palace on the Sea” was once a luxurious floating restaurant. Now it’s an abandoned vessel sadly chained to the dock without a purpose. A woman in a Myanmar traditional dress makes a ghostly entrance and dances with the past.

Midi Z. 2012. Taiwan/Myanmar. 105min. DCP.
Cast: Wu Ke-Xi, Wang Shin-Hong
A-hong and San-mei, both from Myanmar, live a parallel existence crisscrossing the metropolis of Bangkok and the remote border town Dagudi. To earn enough money to free his younger sister who has been sold to human traffickers, A-hong tries his hand at the drug trade. To earn the ID required to settle in Taiwan, San-mei works for a gang boss who promises to open doors. Inspired by a true story the filmmaker heard while traveling through the Myanmar/Thai border several years ago, Poor Folk vividly portrays a harrowing world filled with displaced migrants, human traffickers, drug dealers, and prostitutes all struggling to survive.