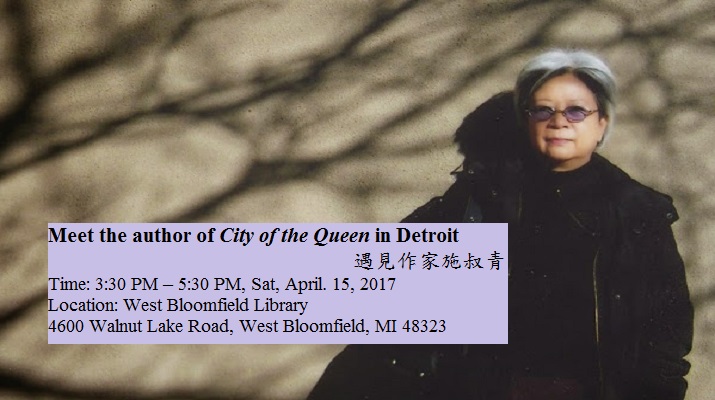 The lecture and discussion is open to the public with novelist Shih Shu-Ching and the Professor of Chinese Tze-Lan Sang from Michigan State University.

The topic of the lecture will focus on the writings of North American Chinese authors. First, the speaker and Taiwanese writer Shih Shu-Ching will review the history of United States immigration policy towards Chinese people. She will then present the English novels and scriptures of Lin Yutang and Li Jinyang over the last century, Taiwanese student literature, as well as new immigrant literature since the 1980s. The speech will be an in-depth analysis of the characteristics of writers who live abroad, focus on the cultural phenomenon of Chinese talent, and compare their situation to that of American Jewish writers.

Shih Shu-Ching is one of the most influential cultural figures in Taiwan and Hong Kong. Her novels include The Barren Years, Passing by Loytsin, and Blush of Intoxication. She gained notice for her outlandish, unusual storytelling when she first launched her writing career: she excelled in a modernistic and existentialistic narrative prose of illusions and outrageous experiences.

Tze-lan Sang teaches classes on modern Chinese literature and visual culture in Michigan State University. Among her major publications are The Emerging Lesbian: Female Same-Sex Desire in Modern China (University of Chicago Press, 2003) and Documenting Taiwan on Film: Issues and Methods in New Documentaries (Routledge, 2012). She has also written many book chapters and journal articles on topics ranging from contemporary writers and film directors to traditional Chinese opera.