Home
EVENT
The Cultural Trajectory of Democracy: A Special Series of Events for the 30th Anniversary of the Lifting of Martial Law in Taiwan
AAA
FB email 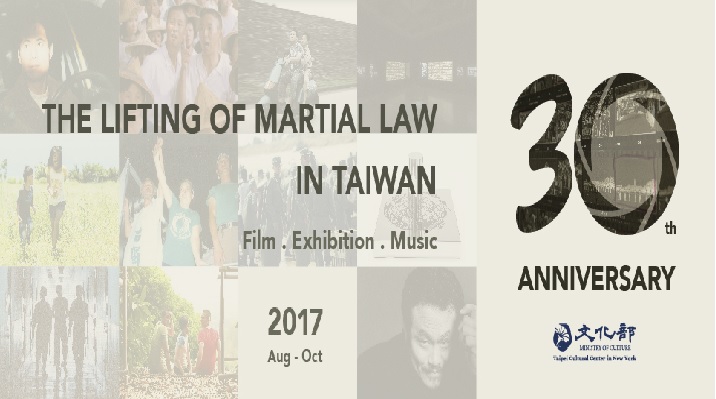 This year marks the 30th anniversary of the lifting of martial law in Taiwan. The imposition of martial law stretched beyond sociopolitical issues and into arts and culture, which at that time, were unfairly interpreted through ideological lens. Under this strict censorship, many artworks were labelled unlawful, and ended up being either forcefully revised or banned.

However, after the lifting of martial law, in addition to the liberation of the media, and the lifting of the ban on forming political parties, the public was allowed to assemble and express their opinions. Artistic creations were also liberated from oppression and confinement, and become open and innovative. For the past few decades, contemporary art in Taiwan has sprung up like mushrooms, existing freely in all possible forms. Such phenomenon undoubtedly goes hand in hand with the development of democracy in Taiwan.
Thus, we have curated this special event for the 30th anniversary of the lifting of martial law, which includes an exhibition of documentary images, a contemporary art exhibition, pop music performances, as well as a film series. All of these activities will take place in New York City, along with other cities in the United States.

All activities include seminars, through which we hope to initiate dialogue on the history of this period and manifest the universal value of human rights. We also aim to deepen the American public’s understanding of the trajectory of democracy in Taiwan, while corresponding to the international transformative justice movement.

“Power, Haunting & Resilience” selects the most representative artworks between the martial law period and 2010. These artworks, represented in diverse content and artistic form, demonstrate different creative approaches under different political structures. After the lifting of martial law, many artists started to explore and to confront sociopolitical, societal, and cultural issues through their creations. Their avant-garde spirit and courage are undoubtedly the stimuli for the development of contemporary art in Taiwan.

“History’s Shadows and Light” features work by several of the most representative photojournalists who were on the frontlines before and after the lifting of martial law (1986 - 1990). The photography collection addresses issues including political and human rights, proletarian movements, and environmental protection. Rarely seen documentaries by the Green Team are also on display. This exhibition simulates the conditions in a darkroom with photographic processing back in the era of films. Series of images on the negative films are on display in the lightboxes, juxtaposed with enlarged black and white prints of selected shots. The show demonstrates the creation of picturesque language for individual expressions through various innovative photographic approaches, and discloses the process of photography in Taiwan moving from sheer documentation into a contemporary art form.

Enchanted Formosa: An Evening of Music from Taiwan

“Enchanted Formosa” focuses on the evolution of pop music, ranging from folk music before the retrocession to Mandarin and Taiwanese songs during early post-retrocession period, from songs of the Stardust period, banned songs, purified songs, translated songs, and campus folk rock during the martial law period to diverse pop music after the lifting of martial law. In addition to merely appreciating the music itself, audiences experience the social ambience of different eras in Taiwan.

Martial Law and After: Reflection of the 30th Anniversary of the End of the Martial Law in Taiwan Cinema

This film series presents a selection of classic Taiwanese films throughout the past thirty years, focusing on the public and their encounters before and after the lifting of martial law. The series not only examines the life and mental status of every community in Taiwan, but also constructs a spectrum of circumstances for different communities, both of which reflect on the process of democratization and globalization after the lifting of martial law in Taiwan.

★A talk on“Minorities’Self-representation and Identity Construction: Indigenous People as a Case Study”to follow