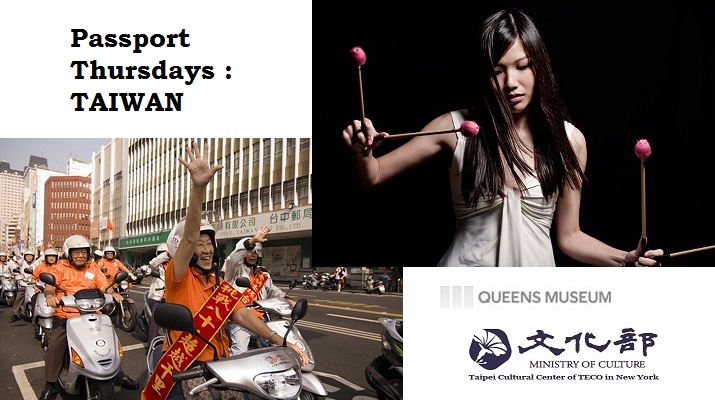 The Queens Museum’s summertime staple, Passport Thursdays: International Dance, Music, and Film Series, returns for another exciting season featuring some of the many international locales that fuel Queens’ cultural and artistic vitality. This year’s adventure includes stops in Ecuador, Ethiopia, India, and Taiwan.
The “Taiwan Night” on 8/18 is collaboration between Queens Museum and Taipei Cultural Center to introduce Taiwanese culture to the residents in Flushing, NY. This event brings to the area highly selective programs:

Music: Yuhan Su Jazz Band
A native of Taiwan, New York based-vibraphonist Su came to the United States in 2008 to study at Berklee College of Music. Since then, she has performed with her jazz quartet throughout the East Coast and joined the acclaimed saxophonist Greg Osby’s label, Inner Circle Music. The band will perform a set of music featuring the traditional music from different ethnic groups in Taiwan, including Taiwu ancient ballads, Hakka traditional song, and Taiwanese folk song. Yuhan will bring a new series of compositions inspired by Chinese mythological KuaFu, a giant who decided to chase and catch the Sun.

Film: Go Grandriders!
(Taiwan, 2013, 80 min, Mandarin with English ST)
A group of senior citizens, many of whom learn how to ride a motorcycle for the first time, embark on what may be the most daring adventures of their lives: a 13-day tour around the island of Taiwan entirely on motorcycles. Among these 17 “Grandriders,” two have had cancer, four need hearing aids, five suffer from high blood pressure, eight have coronary heart disease, and every one of them has joint problems. However, at the youthful age of 80+, they dare to challenge themselves and discover the land they have lived all their lives from a new perspective.

Huang Zi-huang was born in Pingtung, Taiwan in 1961, she lives and creates art in Jhutian Township, Pingtung County, Taiwan. Huang’s Ziyou studio attempts to preserve and promote Hakka culture and craft. In 2014 she was invited to participate in Passport to Taiwan at Union Square in Manhattan NY. Her works has been collected by: Chimei Museum, Taiwan, National Taiwan Museum of Fine Arts, Angel Art Gallery, and Cultural Affairs Department of Pingtung County.

So leave your baggage at home and bring a picnic blanket out to Flushing Meadows Corona Park for an evening in the shadow of the majestic Unisphere. There will be free art making workshops for families before the films start, our galleries and café will remain open until 8pm, and we won’t let a little rain spoil the fun, we’ll just move the whole event indoors.