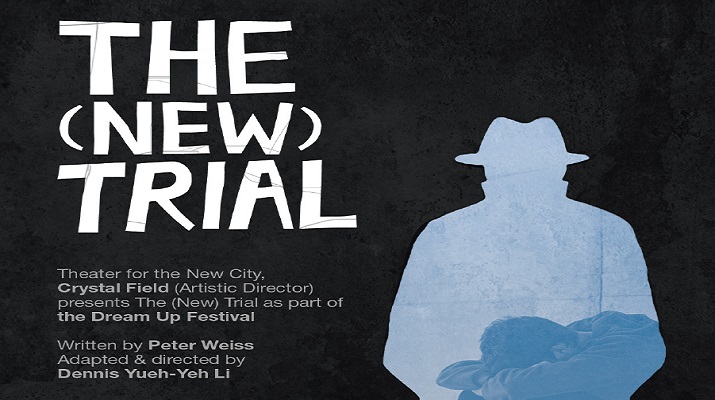 The (New) Trial
Written by Peter Weiss
Adapted & Directed by Dennis Yueh-Yeh Li
as part of Dream Up Festival
Tuesday, September 1, 2015 through Sunday, September 6, 2015
At Theater for the New City
The Joyce and Seward Johnson Theater
155 1st Ave, New York, NY 10003
New York, NY—After the huge success of Marat/Sade, an experimental play by the celebrated
German playwright Peter Weiss (Tony Award and New York Drama Critics’ Circle Award for
Broadway production in 1965), a newly formed international theatre ensemble, directed and led
by Dennis Yueh-Yeh Li, Artistic Associate of The Living Theatre, will bring Weiss’s last play
The New Trial to life. With an original adaptation, titled The (New) Trial, the production is
intended as an homage that celebrates Weiss’s 100th birthday and his theatrical legacy. The
adaptation will be presented in the genre of experimental theatre in English and German,
attempting to re-introduce Weiss’s aesthetics and German post-war theatre to American
audiences. The (New) Trial is partially funded by the Ministry of Culture, Taiwan, and made
possible by Label Gray and The Living Theatre.
With Weiss’s partisan plays as a magnet, this eclectic ensemble, comprised of actors from across
the globe, including Germany, Israel, Spain, Argentina, Singapore, Italy, and Taiwan, is brought
together by the belief in the power of avant-garde political theatre. Throughout the production
the artists will comment on the sociopolitical structure of the contemporary society from the
perspective of their own cultural and political background The (New) Trial will be presented at
Theater for the New City, September 1-6, as part of Dream Up Festival. Details of the time and
dates are as follows: September 1st -3rd at 6:30pm, September 4th at 9pm, September 5th at 8pm,
and September 6th at 5pm.
The (New) Trial presents a surreal look at the life of Joseph K, an attorney at an international
corporation, by exploring K’s obsessive idealism and his self-destructive addiction to help others.
Confined to his docile body, K is manipulated to function as a public mask by the corporation he
works for to win the “war” of the global market expansion, and is eventually abandoned by once
the victory is obtained.
Continuing the legacy and the belief of The Living Theatre, in The (New) Trial, director Dennis
Yueh-Yeh Li attempts to deconstruct societal compliancy and the hierarchical power relations
among the characters in the play, hoping to stimulate critical thoughts. To manifest this essential
concept, actors will explore the dynamics between the different characters and break through the
fourth wall to share personal experiences of their lives as actors on/off stage. A giant mirror will
cover up the stage floor for actors to be fully aware of the power relations to the self.
The ensemble of The (New) Trial includes Leah Bachar (United States), Brad Burgess (United
States), Jody Doo (Singapore), Serena Gregorio (Italy),Maria Hoffmann (Germany), Samantha
Hoefer (Germany), Omri Kadim (Israel), and Maite Uzal (Spain). The production team includes
Maria Hoffmann (Producer/Germany), Miriam Ibrahim (Producer/Germany), Leonie Ettinger
(Production Manager/Germany), Dennis Yueh-Yeh Li (Director/Taiwan), Laura Virginia Sández
(Stage Manager/Argentina), You-Shin Chen (Stage Designer/Taiwan), Yi-Chung Chen (Lighting
Designer/Taiwan), and Yung-Chin Chang (Sound Designer/Taiwan).
Director Dennis Yueh-Yeh Li earned his Master’s degree in Performance Studies at Tisch School
of the Arts, New York University. As a director, playwright, performer, and performance artist,
Dennis has devised productions that address sexuality, literature, philosophy, and politics. His
work offers unique perspectives on time, space, identity, and power-relations. Dennis endeavors
to make powerful and transcendental performances to stimulate compelling reactions in
audience. He is currently Artistic Associate of The Living Theatre. His directing credits include
Freud Out Loud—Civilization and Its Discontents (Judson Memorial Church), To Defend
Freedom (The Secret Theatre), Upcoming Train/Stopped Clock/Untitled Waiting (Theater for the
New City), Marat/Sade (Taipei, Taiwan), and others.
###
Back
返回頂端
關閉選單
Keywords: 文化部
fb youtube mail