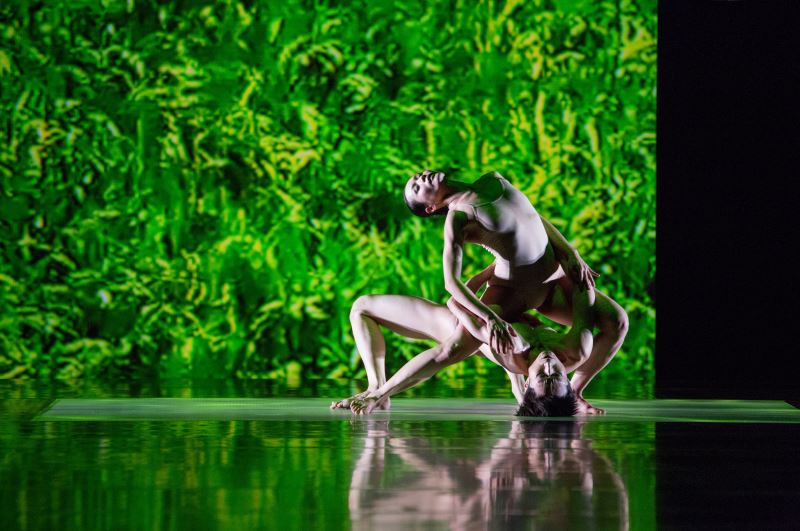 In Rice, a lone dancer enters the dark stage. As he steadily walks across it, dangling a long bamboo stick held horizontally, the back curtain gradually rises to reveal a video image of rain-soaked soil. The video, filmed on location over the full cycle of rice cultivation, transforms the bare stage into the organic rice paddies of Chihshang in southeastern Taiwan. Moving against this sumptuous vista, 24 dancers create a movement-scape that evokes the images of farmers, rice stalks, pollination, water, wind, fire, and the pain and joy of new life.

Lin Hwai-min has referenced rice in his previous works, mostly notably Legacy (1978) and Songs of the Wanderers (1994, performed at the Next Wave Festival in 2000). But Rice is more abstract and lyrical. Its movements are a synthesis of Western modern dance, ballet, and martial arts. The alternation of Hakka folk songs, drumming, and Western classical music also shows this cross-culture pollination. As part of the creative process, dancers worked in the field alongside the farmers. Lin said it was a “back-breaking experience. But we got in touch with the wind and the sun, the drizzle of rain and the mud and the soil. You can create work in a studio but the elements of nature stimulate you physically.” The dance is a tribute to the land and people integral to Cloud Gate during its prosperous 40-year journey.

Cloud Gate Dance Theatre of Taiwan, the first contemporary dance company in the greater Chinese-speaking community, was founded by Lin Hwai-min in 1973. Its name is drawn from the oldest-known Chinese dance. The 24 dancers comprising Cloud Gate receive training in meditation, Qi Gong (an ancient breathing exercise), internal martial arts, modern dance, ballet, and calligraphy. Through Lin’s choreography the company transforms ancient aesthetics into a thrilling and modern celebration of motion. The company made its BAM debut in 1995 with Nine Songs; since then it has appeared at BAM with Songs of the Wanderers (2000 Next Wave), Moon Water (2003 Next Wave; recognized as one of the best dance events in 2003 by The New York Times), Wild Cursive (2007 Next Wave), and Water Stains on the Wall (2011 Next Wave). Cloud Gate has also toured extensively with frequent engagements at Sadler's Wells Theatre and Barbican Centre in London, the Moscow Chekhov International Theatre Festival, the Movimentos Festival (Germany), and the Internationales Tanzfest NRW directed by Pina Bausch. In April, 2015, the company opened its brand-new headquarters in Taipei. It is the first and only complex built for and by a performing arts organization in Taiwan.

A writer-turned-choreographer, Lin Hwai-min often draws inspiration from Asian cultures and aesthetics to create works with contemporary resonance. He founded Cloud Gate Dance Theatre of Taiwan in 1973 and Cloud Gate 2 in 1999. Honoring him with a Lifetime Achievement Award in 2009, the jury of the International Movimentos Dance Prize (Germany) said Lin is “a foremost innovator of dance” and that he “ranks among artists of the century such as William Forsythe, George Balanchine, Birgit Cullberg…” In July 2013, he received the prestigious Samuel H. Scripps/American Dance Festival Award for Lifetime Achievement. The festival stated that Lin is "one of the most dynamic and innovative choreographers today...his choreographic brilliance continues to push boundaries and redefine the art form.” Previous awardees include Martha Graham, Merce Cunningham, Pina Bausch, and William Forsythe. Lin is the first recipient based in Asia. He also served as the author for the 2013 International Dance Day Message. Lin Hwai-min has received honorary doctorates from six universities in Taiwan and Hong Kong, the John D. Rockefeller 3rd Award, the Distinguished Artist Award from the International Society for the Performing Arts, the Chevalier of the Order of Arts and Letters from the French Ministry of Culture, and the First Rank Order of Brilliant Star with Special Grand Cordon from the government of Taiwan.

Concept and choreography by Lin Hwai-min

For experienced dancers with dance or body movement training

Visit BAM.org/master-classes for more information and to register