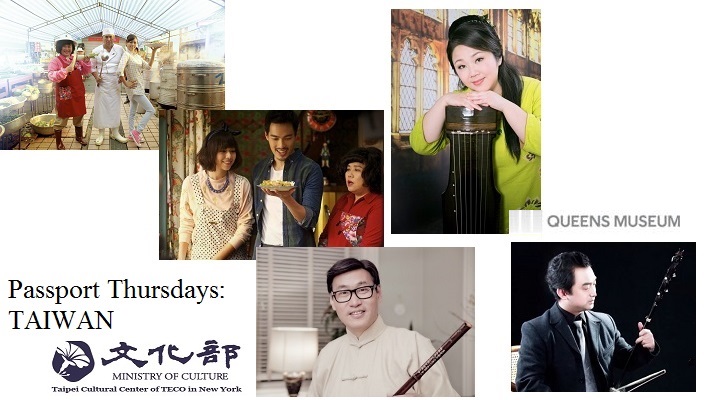 The Queens Museum’s summertime staple, Passport Thursdays: International Dance, Music, and Film Series, returns for another exciting season featuring some of the many international locales that fuel Queens’ cultural and artistic vitality. This year’s adventure includes stops in the Caribbean, Taiwan, India, Colombia, Korea, and South Africa.
The “Taiwan Night” on 7/23 is a collaboration between Queens Museum and Taipei Cultural Center to introduce Taiwanese culture to the residents in Flushing, NY. This event brings to the area highly selective programs – one in music and one in movie:

Yimin Miao Dizi / Xiao
Yimin Miao is an internationally renowned Chinese woodwind virtuoso. He is the founder of the Ba Ban Chinese Music Society of New York. When Miao was nine years old, he started studying dizi privately with Mr. YU Xunfa, the most celebrated musician in China. Miao is a former flutist with the internationally acclaimed Shanghai Traditional Orchestra. Miao immigrated to the United States in 1996 and has performed at Lincoln Center, Carnegie Hall and the Metropolitan Museum of Art. He has lectured and conducted workshops at Yale University, Cornell University and New York University. Miao is not only a specialist on the dizi and xiao, but he is also a virtuoso performer and instructor on other Chinese wind instruments as well. As a seasonal artist of the Santa Fe Opera in 2014, Miao played various bamboo flutes in the premiere production "Dr. Sun Yat-sen".

Shih-hua Judy Yeh Guzheng/ Guqin
Shih-Hua (Judy) Yeh, acclaimed Guqin and Guzheng Master, is both Founder and Director of the Taiwanese Music Ensemble of New York. She is also Founder of the New York Guqin School. Shih-Hua has specialized in playing professional concert performances on many varied Chinese musical instruments. She is a highly respected music educator and was named an official judge of music examinations by the China Conservatory of Music and Chinese Music Organization in 2011. She has also been a lecturer of the Jinwen University of Science and Technology in Taipei.
Ms. Yeh graduated from the Taipei National University of the Art (TNUA) with a Guqin Major and earned her Master’s degree in Ethnomusicology from Sheffield University in the UK. She is a member of Water Stage Ensemble based at TNUA and has performed both nationally and internationally. She has won numerous awards in distinguished Chinese music events. She has been invited to perform at such highly honored and respected professional venues as Lincoln Center, Merkin Hall and Weill Recital Hall, Carnegie Hall.

Roy Luo Erhu
Roy Luo started his journey in the art of Erhu in his childhood, and was trained by Professor Hanyang Zhao in the Central Conservatory of Music of China. He was the player of the National Orchestra of Guangdong Province and the tutor of National Orchetra of Sun Yat-sen University. He used to perform together with Chinese master musicians like Mr.Qiwei Yu and Mr. Jinlong Fang. He has developed a very versatile and detailed style in performing, and has deep understanding in both traditional and modern Chinese music.


Film: Zone Pro Site—The Moveable Feast (Taiwan, 2013, 145min, Mandarin with English ST)
More than 20 years ago, there were 3 outdoor banquet (ban-doh) master chefs who dominated the catering business in Taiwan. However, business has been in decline since Taiwan’s economic decline. The late Master Fly Spirit wanted to pass the family recipes and culinary skills on to his only daughter, Wan, but she runs away from the family business to become a fashion model. Nevertheless, the indebted Wan is destined to take up mission she once shunned by joining forces with her equally down-on-her-luck mother to win grand prize in a national catering contest.

So leave your baggage at home and bring a picnic blanket out to Flushing Meadows Corona Park for an evening in the shadow of the majestic Unisphere. There will be free art making workshops for families before the films start, our galleries and café will remain open until 8pm, and we won’t let a little rain spoil the fun, we’ll just move the whole event indoors.
Passport Thursdays Outdoor International Dance, Music & Film Series: TAIWAN
Date: Thursday, July 23rd at 7:00PM~10:00PM
Venue: Queens Museum of Art (New York City Building in Flushing Meadows Corona Park, Queens, NY 11368)
For more information: http://www.queensmuseum.org
+1-718-592-9700