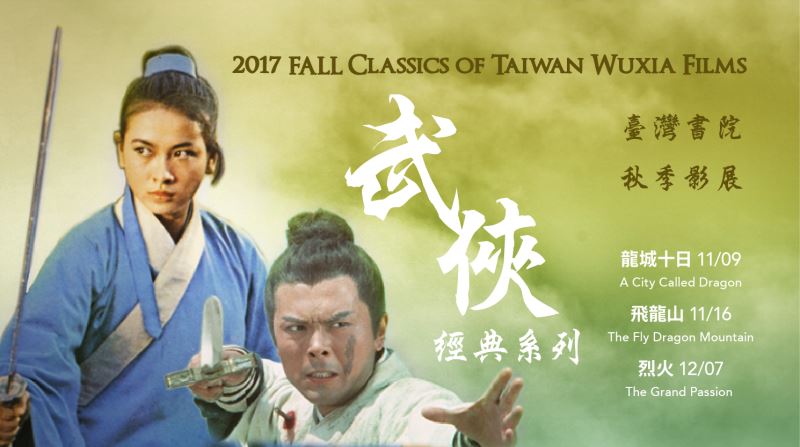 The Taipei Cultural Center in New York is delighted to feature three classic Taiwan wuxia films for the Fall 2017 Taiwan Academy Film event. The screening dates are as follows:

In the Southern Song Dynasty, heroine SHANG Yen-Chih ventures to the important Jin-controlled military base Dragon City to meet up with revolutionary comrade CHEN Yang-Xin, who is in possession of a secret map of resistance against the Jin. She finds out, however, that the entire CHEN family has been executed by Jin general BU Lung. To find the secret map’s whereabouts, SHANG Yen-Chih continues to track BU Lung, eventually discovering to her surprise that her long-term foe is actually a Song ally who has been undercover for years…

A City Called Dragon is driven by a suspenseful plot, meticulously-selected locations and breathtaking dramatic tension. Newcomer HSU Feng especially impresses as heroine SHANG Yen-Chih and cuts a dashing figure in her period costume. Her strong performance is complemented by SHIH Chun’s portrayal of Jin general BU Lung, and together they make the two protagonists’ gradual shift from rivalry to empathy one of the highlights of the film.

As young Er-Hu begs outside a run-down temple, Miss YUN of the Zhang’s Village gives him a white jade pendant. That night, the jade pendant is stolen as Er-Hu’s mother is murdered by the thief. Ten years later, Er-Hu has become a warrior renowned for fighting injustices and protecting the weak...

Director CHEN Hung-Min began his career as a film editor. He devoted painstaking care into the design and choreography of every action scene in The Fly Dragon Mountain, from the fights and chases to the horse-riding and cart-pulling sequences, creating cinematic moments infused with both sensory and dramatic tension.

During the Southern Song Dynasty, rebel soldier ZHENG Yun is sent by Han general YUE Fei to infiltrate the enemy base of Damingfu. His mission: to deliver a secret list to the Mount Taihang Zhongyi Society rebels so the two armies can consolidate their forces to retake the Central Plains. Unbeknownst to the rebels, Damingfu commander Ye-lu Zhong has already been tipped off, leading to ZHENG Yun’s unfortunate demise and leaving LU Liu and his sister LU Xiao-Ling as the rebels’ last hope of completing the mission. Can the siblings emerge from the ensuing battle of wits and successfully deliver the list to Mount Taihang?

The Grand Passion is a tense historical drama fueled by complex relationships and a vivid narrative full of twists and turns. Despite a short running time of just 85 minutes, the film manages to successfully reconstruct the perilous rebellion against the Jin during the Southern Song Dynasty, leaving audiences holding their breaths.
Back
返回頂端
關閉選單
Keywords: 文化部
fb youtube mail