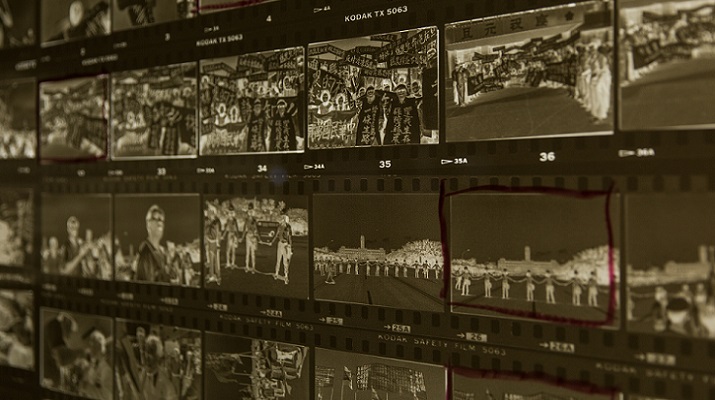 
Organized by and first shown as a special section of the exhibition Faint Light, Dark Shadows at Taipei Fine Arts Museum from March to June of this year, History’s Shadows and Light features photographs of major political and social movements in Taiwan from 1986 to 1990—a time when photography not only served witness to society’s drastic transformation immediately before and after the end of martial law in 1987, but also began to expand the expressive force and contagious appeal of the contemporary photographic aesthetic.

This exhibition ponders some of the issues that arose with the lifting of martial law, such as human rights, farmers’ and workers’ movements, and environmental protection, as documented through the lens of several of Taiwan’s most representative photojournalists—Liu Chen-hsiang, Huang Tzu-ming and Hsu Po-hsin, as well as the rarely seen documentary films of the Green Team.

Extracting the idea of processing photographs in a darkroom back in film-camera era, in this exhibition a series of negatives are displayed in the lightboxes, juxtaposed with enlarged black and white prints of selected shots. This demonstrates the creation of picturesque language for individual expressions through various innovative photographic approaches, and discloses the process of photography in Taiwan moving from sheer documentation to today’s contemporary art form.

Curatorial Statement
Martial law was imposed in Taiwan on May 19, 1949 and lifted by President Chiang Ching-Kuo on July 15, 1987. Over the course of the 38-year-long martial law period, the basic human and civil rights guaranteed to the people by the Constitution, including freedoms of speech, privacy and correspondence, assembly, association, procession, petition, etc., were all abrogated.

The lifting of martial law was a major watershed in the development of Taiwanese society. It came after nearly four decades of rapid economic growth and modernization, progressive loss of the island’s international status, and a resurgence of political activism from the late 1970s.
This year marks the 30th anniversary of the end of the martial law period. To commemorate, Taipei Fine Arts Museum has organized this exhibition, featuring documentary photographs of political and social movements from 1986 to 1990, a time when Taiwan was undergoing drastic transformation on many fronts.

In the 1980s, “political photography,” in coordination with Tangwai(黨外,literally non-ruling party) magazines, focused on political events and mass rallies and took a critical stance in opposition to the government. Employing a passionate visual vocabulary, it inveighed against violence on the part of the national government, achieved concrete political action, and realized the possibilities for Taiwanese photography to effect political reform. Photographs, viewed as documents in a wider sense of the word and references to particular places, events, persons, etc., also served as evidence at the level of governance and law. They were witnesses both “on the scene” and “away from the scene.” Those in power used documentary photographs to impose their public authority, and the oppressed used them to denounce oppression and injustice, to call for the righting of wrongs and for change. The camera lens is responsible only for capturing images; questions and interpretations come from the gaze of the photographer and the photographed. The exhibition “History’s Shadows and Light” ponders some of the issues that arose with the lifting of martial law, such as human rights, farmers’ and workers’ movements, and environmental protection, as documented through the photojournalism of Liu Chen-hsiang, Huang Tzu-ming and Hsu Po-hsin, and the precious documentary films of the Green Team.

Moreover, in the early 1990s, when digital cameras had yet to become commercially available, photojournalists working for then leading newspapers—China Times (中國時報), United Daily News (聯合報), Independence Morning/Evening Post(自立報系) and Tangwai magazines, including Yeh Ching-fang, Liu Chen-Hsiang, Pan Hsiao Hsia, Huang Tzu-ming, Hsu Po-hsing, Kuan Hsiao-jung, Chou Ching-hui, Tsai Ming-de, Hsu Tsun-hsu among others, still used film cameras. Every day after photographing a news event, they had to go into the darkroom to develop and fix their photos. Only after they had chosen the most suitable prints and submitted them to their editors was their work complete. As media restrictions were lifted in the 1990s, the media burgeoned, and demand for images surged. This in turn gave photographers more room to develop themselves. Thus, some photojournalists not only provided a clean and accurate record of events, but also began experimenting with visual effects – coarse granularity, high contrast or even out-of-focus or blurred images – to convey a realistic perception of the conflict and passion at the scene. One example is Yeh Ching-Fang of the China Times, who published photos of fist-fights in the legislature.

Not only did political photography, born around the lifting of martial law, embody the values of humanitarianism and social justice, as well as the passions of social movements while employing props, theater, song and dance – such as the black masks that the blacklisted Taiwanese independence activist Kuo Pei-Hung used to evade detention after returning from the United States – but it also expanded the expressive force and contagious appeal of the contemporary photographic aesthetic.

Artists
LIU Chen-hsiang 劉振祥(b. 1963, Taipei, Taiwan) joined the China Times Weekly in 1986, before becoming a photographer of the Independent (Zili) Newspaper Group in 1988. During his seven years with the Independent, he documented the street protests before and after the lifting of martial law with photography and left behind many precious historical images of Taiwan’s transition to democracy.
Apart from photojournalism, Liu has worked closely with Cloud Gate Dance Theatre, the first modern dance group of its kind in Taiwan and Asia, since 1987. He has taken still photos for Hou Hsiao-hsiang’s Dust in the Wind, Edward Yang’s Terrorizers and all feature films by Chung Mong-hong. In 2010, he received the Wu San Lien Award in the category of photography. He has published photography books such as Taiwan Photography (2000) and In Between the Moments: Cloud Gate in a Photographer’s Memory (2009).

HUANG Tzu-ming 黃子明(b. 1960, Tainan, Taiwan) started his art career working as a designer in 1984, but soon switched his career path to photography the following year. When the restrictions on the press were lifted in 1988, he joined the Independent Newspaper Group and worked as a photojournalist for the morning and evening post. Later that year, he joined the China Times Group as a photojournalist and is now the head of the center of photography of China Times. As a photojournalist for nearly 30 years, he experienced the major political, economic, cultural and social movements in Taiwan before and after the lifting of martial law.

HSU Po-hsin 許伯鑫(b. 1959, Taiwan) was a photojournalist for the Independent Evening Post from 1988 to 1995. He left behind important photographic records of the street protests in Taiwan. After years of working as a photographer for the print media, he returned to school to study sound and video documentary. He is now an independent documentary filmmaker devoted to making documentaries about Taiwan’s village culture, folk religion and social issues as well as a part-time lecturer for video production at Fu Jen Catholic University.

Green Team 綠色小組(1986-90), is a photographers’ group established in October 1986 dedicated to documenting social movements. Using handy electronic home video cameras, they documented the social movements of the times, and distributed the videos through informal channels to subvert the official news of the big three TV networks. They were a more representative “minority media” outlet before and after the lifting of martial law.
The period from 1986 to 1990 was a time when the people of Taiwan actively took part in protests for democracy, human rights, fairness and justice. During these four years the Green Team made 1,500 videos, creating 3,000 hours of precious film of Taiwanese citizens agitating for democracy.
Back
返回頂端
關閉選單
Keywords: 文化部
fb youtube mail