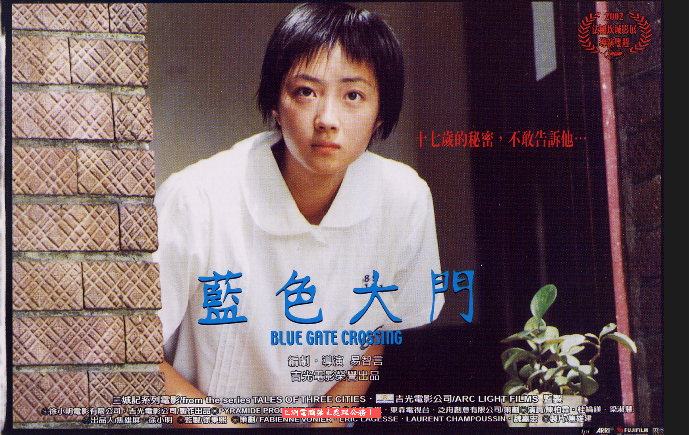 The Taipei Cultural Center in New York is delighted to feature three classic romance films for the Summer 2017 Taiwan Academy Film series. The screening dates are as follows:

《藍色大門》Blue Gate Crossing (2002)
Director YEE Chih-Yen
Director YEE avoided symbols commonly seen in Taiwan New Cinema films, such as military dependents' villages and old houses, instead focusing on the innocent and simple love of young people and their exploration of sexual and self-identity. Adopting a refreshing and aesthetically pleasing style and employing the use of simple images and language, the film is said to have opened the doors for the growth of youth-oriented films in Taiwan.

《藍月》 Blue Moon (1997)
Director KO I-Chen
A “blue moon” refers to something that happens once in a lifetime or a second full moon in the same calendar month. Cuen-Shu and A-Gua, classmates who grew up together, both end up falling for Yi-Fang, a girl they met while playing softball. On a blue moon evening, the three protagonists head to the Blue Moon Cafe to untangle their love triangle. Facing a difficult choice and not knowing what she wants, how will Yi-Fang come to a decision? Blue Moon is headlined by fresh-faced actress Tarcy SU, who delivers a vivid portrayal of a city-dwelling woman’s yearning for love.

《我是一片雲 》Cloud of Romance (1977)
Director CHEN Hung-lieh
Adapted from the Chiung-Yao novel of the same name, Cloud of Romance is one of the most representative love story films of the 1970s. Though the torrid love triangle ends in tragedy, the film remains an unforgettable memory for many movie fans of that generation.