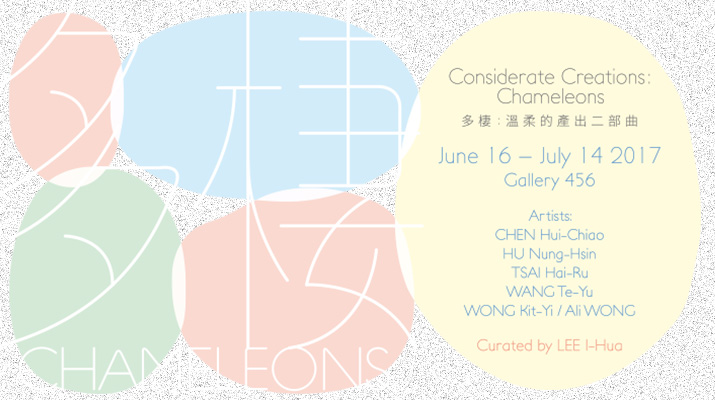 On view from June 16 to July 14, the Taipei Cultural Center in New York and Gallery 456 are delighted to co-present the second part of a female group show Considerate Creations: Chameleons. Curated by art manager I-Hua Lee of Taipei Artist Village, the exhibition implies that the hard work done behind the scenes allows art projects to successfully come to fruition. Artworks on display are in various forms, including video, photograph and installations, yet all focus on the female artists’ common experience of playing multiple roles. Apart from discussing the subject of women’s multiple roles, the exhibition also addresses family issues such as marital and parental relations.

Considerate Creations: Chameleons is a sequel of Considerate Creations, which was presented in Taipei Artist Village in 2015 and will be touring to New York this year. This exhibition features works by female artists who wear many hats, from art directors, curators, museum staffs, archivists, to wives and moms. Taiwanese artists Chen Hui-Chiao, Wang Te-Yu, and Tsai Hai-Ru are invited to exhibit with New York-based artists Hu Nung-Hsin and Wong Kit-Yi/Ali Wong.

Cross–disciplinary practice is a common state, and contemporary artists are commonly acquired a diverse skillset. Lee categorized this group of art professionals, whose contribution cannot be overlooked, as “Chameleons artists”. These “Chameleons artists” take on multiple roles to make sure that they can secure the pursuit of their dreams. It’s a statement of dedication to art, and an expectation of Considerate Creations. We look forward to seeing this movement, and this group of artists bringing more insights and positive value into the art world and beyond. And especially we salute to these gentle “Chameleons artists”.

ABOUT THE ARTISTS
CHEN Hui-Chiao (b.1964, Tamsui, Taiwan) was one of the founders of IT Park Gallery in Taipei. She is also one of only a handful of female artists from Taiwan currently active on the international art scene. After the pieces Within Me, Without Me in Space, Within Space (1997) and Then Sleep, My Love (1998) Chen’s renown grew and the solo exhibition Here and Now at the Museum of Contemporary Art, Taipei, in 2006, confirmed her status as a star in the firmament of contemporary Taiwanese art.

In Taiwan, Chen is known for the new standards she has established in her dual role, first as director of IT Park Gallery, widely considered an important “promoter of modern art.” IT Park Gallery was established in 1988 and in 2009 was awarded the 13th Taipei Culture Award. In that timeframe, Chen’s works have earned her a reputation as something of an enigma in Taiwan’s contemporary arts scene, known for pushing extremely simple materials to their limits and using them to explore new territory. Chen has been invited to show works at numerous international exhibitions. These include: Everyday Miracles (Extended) at the SFAI Walter and McBean Galleries and REDCAT in Los Angeles, 10th Istanbul Biennial and the Gwangju Biennial (2002) in South Korea. She also participated in Face to Face – Contemporary Art from Taiwan a touring group exhibition of art museums in Australia, Inside Out – New Chinese Art a touring group exhibition of art museums in the US and the Osaka Triennale 1996/7th International Contemporary Art Competition. Chen’s works have been collected by art galleries and private art collectors across Taiwan and she has served as a judge at the SANCF Award, Taipei Artist Village, Taipei Arts Award and the National Award of Arts. Since 2006, Chen has also been the recommended consultant for Taiwanese artists at the Glenfiddich Artists’ Village in Scotland.

TSAI Hai-Ru (b.1967, Taiwan) lives and works in Taipei. Tsai considers creating artwork is a conversation, learning, and interpreting process between self and society. Her body of work is closely connected to different phases in her life, and in the meantime breaking away from the frame of her supposed role. Tsai exhibited at Taipei Biennale in Taipei Fine Arts Museum(1998), in which she tried to open a discussion of female caretakers. Major exhibitions include Dance of the Dotted Line (2008), curatorial project Joy Luck's Mirror Garden (2014), etc. Extended from her dinner project Haiton Kitchen, Tsai founded Haiton Art Center in 2016. She is the director and curator of Haiton Art Center.

WANG Te-Yu (b.1970, Taiwan) received M.F.A. Fine Arts from the Taipei National University of the Arts in 2005, works and lives in Taipei. Wang Te-Yu's works have always sought simple ideas. She has always tried to explore the feeling of spatial presence with an extreme economy of media, and goes on to meditate on the existential form and situation of people in these spaces. In 1990 she began spreading out a pure spatial form with fabrics of different material, and this has become a primary motif in the artist's work. In a series of spatial creations named with serial numbers, she has pursued continuous research into the spatial theme, transforming the subjective / objective relationship between spaces and people, and letting the body's sensory experience replace visual experience. In this way the interactive experience between viewers and works functions directly as a pathway that the artist provides for "entry" into the spirit of the work—a work that symbolizes the artist's subjective consciousness. The work also unexpectedly encompasses the participating viewer's subjective experience and constructs a commonly-sensed space through the mechanism of interaction. Wang has held 14 solo exhibitions since 1995 and participated in various international exhibitions including Taipei Biennial in Taipei Fine Arts Museum(1996), Promenade in Asia in Art Tower Mito, Japan(2001), 4e Biennale d'Art Contemporain in Enghien-les-Bains, France (2002), Yokohama Triennale 2005, City on the Move Art Festival in Taipei (2006).

Ali WONG (b.1982, Hong Kong) is an independent curator based in New York. Currently working at the Asia Art Archive in America, Wong holds a BA in fine arts from the Chinese University of Hong Kong. She previously worked at the nonprofit 1a space in Hong Kong and as an assistant to artists Tony Labat and Takashi Murakami. Ali Wong divides her time between being herself and the conceptual artist Wong Kit-Yi.

ABOUT THE CURATOR
LEE I-Hua (b.1982, Taiwan) is a curator and visual artist based in Taiwan. She holds a master’s degree in Studio Art: Art in Media from New York University. Lee currently works as the manager of curatorial and artist-in-residence program in Taipei Artist Village and Treasure Hill Artist Village. She was a project manager at artist Cai Guo-Qiang's studio in New York, and is the founder and chief editor for an independent curatorial journal Chuan Art which was launched in 2011. Lee has exhibited her works in such venues as the Museum of Contemporary Art Studio in Taipei, Apexart and ISE Cultural Foundation in New York, the Newspace Center for Photography in Portland, and the Woman Made Gallery in Chicago. Her first artist book Short Conversation was published in 2009, which later was granted by the National Culture and Arts Foundation and exhibited in Garden City Gallery in Taipei. Her curatorial projects include: Considerate Creations, Taipei Artist Village, Taiwan (2015), You Are the Sunshine of my Life – Treasure Hill Light Festival, Taiwan (2017), and Considerate Creations: Chameleons, Taiwan Academy and Gallery 456, New York (2017).