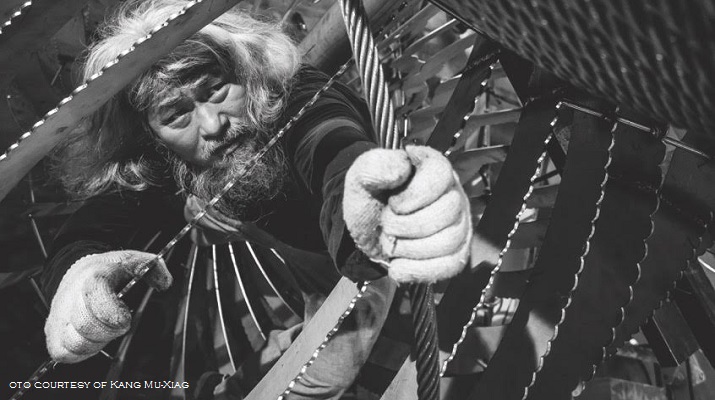 “I first had to clean the used cables with chemicals before molding them in to the shape I desired. I suffered burns, eye injuries and muscle strains and I was exposed to high levels of dioxins as a result of working with a welder for long periods……” sculptor Kang Muxiang recalled the process of his first sculpture made from retired elevator cable. “Nevertheless, giving up a portion of my short life in exchange for a piece of eternal art, a bequest to future generations was all worthwhile,” he added.

Kang worked day and night for about 18 months to complete his first artwork titled “Infinite Life” using discarded elevator cables from Taipei 101, formerly the world’s tallest building and now the fifth. Elevator cables are made from numerous steel wires wound tightly together. They are exceptionally difficult to bend, let alone shape into sculptures. “Everyone thought I was crazy, but I just wanted to do it. If I weren’t a little bit crazy, how could I be an artist?” Kang said. “The cables carried 6.6 million visitors during their six years of operation, so there seemed to be millions of lives wound up in them. That thought really intrigued me.”

“Taiwan Ruyi,” a 3-meter-high, 3-ton sculpture, is his second piece using same technique and materials, and was presented by Taiwan government as a gift to the German city of Karlsruhe to celebrate the 300th anniversary of its founding. “This work is a depiction of a ruyi—a traditional S-shaped ornamental object that symbolizes good fortune and prosperity in Chinese culture,” Kang explained. The sculpture features soft, smooth lines that contrast sharply with the cold and stiff nature of the steel, and is now on permanent display at the plaza of the Center for Art and Media Karlsruhe.

As the first of Taiwan Culture Month’s lecture series, Kang will share the story of his art journey as well as latest challenge—using discarded elevator cables and implementing the concepts of oriental philosophy to create his new series of work.

About Kang Muxiang
Born in 1961 in Tongxiao, Miaoli County, Taiwan, Kang Muxiang — often referred to as the “primitive man of modern Taiwan”— is one of the few Taiwanese sculptors who have made the way onto the international stage.

Kang was first introduced to traditional woodcarving skill at the age of 13. And in the past 30 years, he constantly transcends from the traditional craftsmanship, challenges himself and pushes through his own limitation, and entered the territory of contemporary art. Kang’s works is the combination of traditional craftsmanship and contemporary artistic elements. However, no matter how much Kang’s been evolving, what’s always remain in his works is the strong connection to the Mother Nature.
In 2002, Kang was invited to spend one year on Turtle Island, one uninhabited island on the northeast coast of Taiwan. In that year of absolute isolation, Kang used the driftwoods on the island for his artistic endeavors and entered a direct dialogue with the Mother Nature. This unique life experiences, sharpened Kang’s understanding and enabled him to gain his unique perspective of life. He created a series of works titled “Life” as the closure of this retreating and meditating year.

In 2013, Kang Muxiang was invited by Taipei 101 building to create an environmentally friendly artwork with the steel cables that were previously used in the 101 floor elevators. Kang’s work titled “Unlimited Life” was exhibited at the plaza of the Taipei 101 building and received considerable attention.

In 2015, under the invitation from the city of Karlsruhe, Germany, Kang exhibited his steel-cable sculpture work titled “ Ruyi Life”, which was made with same renewed elevator steel cables of Taipei 101 building on the square of ZKM museum. This sculpture is on display permanently as the city landmark to celebrate the 300th anniversary of the founding year of the city.