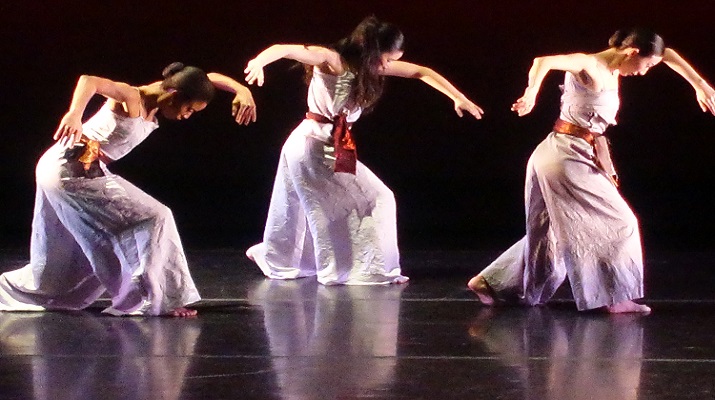 “We are excited to see the stardom-like lineup of Nai-Ni, Kun-Yang and PeiJu, who are unquestionably among the leading forces of modern dance field in New York and across the country,” says Ellen Kodadek, Executive and Artistic Director of Flushing Town Hall. “We are especially delighted to witness this combination because it represents the quality and passion our immigrant artists can bring to our community.”

NAI-NI CHEN established her company in 1988 and has since grown to be one of the most widely toured and presented Asian American dance companies in the United States, with 16 awards from the National Endowment for the Arts, 8 tours abroad and over 30 national tours, reaching 40 states in America. Her works have been commissioned by the Joyce Theatre Foundation, the New Jersey Performing Arts Center, the New Jersey Ballet, Ballet Met and Dancing Wheels. The Nai-Ni Chen Dance Company is currently in residence at the New Jersey City University in Jersey City, NJ. Well known for her collaboration with renowned composers such as Tan Dun, Jason Kao Hwang, Joan La Barbara, Huang Ruo and Glen Velez, Nai-Ni Chen started the CrossCurrent series at Flushing Town Hall 3 years ago featuring various collaborative works with artists from around the world. She is honored to be able to work with TECONY to expand CrossCurrent to include her fellow dance artists from Taiwan.

KUN-YANG LIN, founding Artistic Director of Kun-Yang Lin/Dancers (“KYLD”) & Co-Founder of KYL/D’s CHI Movement Arts Center in Philadelphia, is a Taiwan-born artist-educator who dances in the spaces between East and West, the visible and invisible, innovation and tradition, the individual and collective. Among the primary impulses nourishing his artistry are Buddhist and Taoist world views and the internal energetic flows of many Eastern arts he has practiced over the years including tai chi, chi gong, calligraphy, meditation and Chinese opera movement. These experiences are filtered through extensive training and performance experience across a broad range of contemporary dance techniques and improvisation practices, framed by ongoing cross-cultural research in dance as a medium for the integration of body, spirit and mind. Lin’s journey as an immigrant navigates tensions between his traditional roots, his contemporary interests and his embodied research, which informs his view of dance as a calling that transcends labels, shapes and movement.

PEIJU CHIEN-POTT is one of the most internationally celebrated contemporary dancers. Known for her appearance as a Principal dancer for the internationally renowned dance company, the Martha Graham Dance Company. Ms. Chien-Pott has been discribed as "the most dramatically daring and physically chameleon-esque Graham dancer of her generation." by New York dance critic. Ms. Chien-Pott is originally from Taiwan. She started her dance training in classical ballet and Chinese dance at age 10 and was a member of the leading competition dance group in her home town. In 2008, Ms. Chien-Pott was awarded a Merce Cunningham Studio Merit Scholarship and studied the technique personally with Merce Cunningham. The same year, she was invited to perform with Buglisi Dance Theatre and Korhan Basaran and Artists. The following year, she became a member of the Nimbus Dance Works, the renowned dance company based in Jersey City where she has performed lead roles in work by numerous artists. Ms. Chien-Pott has also served as a teaching artist for the School of Nimbus Dance Works and the public schools in Jersey City. In 2011, Ms. Chien-Pott joined the Martha Graham Dance Company as an apprentice, and soon, she was promoted to a principal dancer in 2014. She is featured in new work created on her by Nacho Duato, Andonis Foniadakis and Mats Ek. Ms. Chien-Pott is honored with the POSITANO PREMIA LA DANZA “LEONIDE MASSINE” 2014 for "Most Outstanding Female Dancer on the Contemporary Scene" and named one of the "Best Performers of the Year" by Wendy Perron of the Dance Magazine. Ms. Chien-Pott was one of the honorees of the "Women‘s History Month" 2014 in Hudson County.