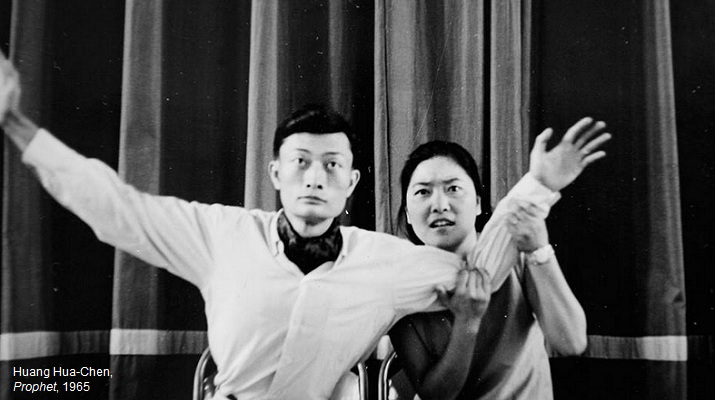 ... technique finally reproducing permanently the violence of the accident; the mystery of speed remains a secret of light and heat from which even sound is missing.
– Paul Virilio, Aesthetics of Disappearance

A Disappearing Act presents two newly commissioned projects by Su Yu-Hsien and Cici Wu, both developed from archival research in an effort to reconstruct historical works that were either lost, fragmented, never realized, or inherently ephemeral. Thinking of archives as constructive and active catalysts that generate new meanings and spur artistic imagination, the exhibition aims to reflect on the boundary between originality and reproducibility, and to explore questions surrounding the notion of authorship: What does it mean to sign one’s name, or to withdraw it? What happens when images begin to circulate in absence of ‘the artist’?

The project further investigates the politics and practices of those who resist through the act of disappearing. Su’s restaging of Prophet, a play written by the Taiwanese avant-garde artist Huang Hua-Chen (1935-96), much of whose work has been lost due, in part, to lack of attention as well as the nature of his diffuse and guerilla-like practice. Originally performed in 1965 and never again, Prophet explored the deep anxiety towards modernity in post-war Taiwan, in which the artist, assigned the role of a transcriber, imagines the self-destruction of humankind: ‘In absolute darkness, just like right now, colors cease to exist. In the airless outer space, speech has become impossible.’

The theme of impossible speech reappears in White Dust from Mongolia, an unfinished film by Theresa Hak Kyung Cha (1951-82). Cha once wrote about her mother, a refugee in Manchuria escaping the Japanese occupation of Korea, speaking in the dark, in a whisper, in secret: ‘The tongue that is forbidden is your own mother tongue.’ As a female artist living in the diaspora, Wu feels an affinity with Cha. Based on the study of Cha’s writings, storyboards, and raw footage, Wu transforms and materializes the unfinished film shot-by-shot into interconnected objects, images, and forms, creating a machine — a receptacle of sensations, in which passages of memory disappear in the abstraction of pure light.

Bios
SU Yu-Hsien (b.1982, Tainan, Taiwan) works as an independent curator and artist, and in his work, often addresses the underrepresented in society, culture, and history, and the possibilities of empowerment through whimsy. Selected exhibitions include the Taipei Biennial 2016: Gestures and Archives of the Present, Genealogies of the Future, the 54th Venice Biennial Taiwan Pavilion: The Heard and the Unheard – Soundscape Taiwan, among others. He graduated from the Department of Plastic Arts, National Tainan University of the Arts.

Cici WU (b.1989, Beijing, China) generally avoids the political and reaches for the universal. Interested in plurality and the complexity of belongings that she cannot forget, she is growing by the day at PRACTICE, the alternative art space she co-organizes with other artists. Having received her bachelor degree from School of Creative Media, City University Hong Kong, and completed her MFA at Maryland Institute College of Art, she recently participated in a show entitled Mosquitoes, Dusts and Thieves at 47 Canal, New York.

Facilitated by Asia Art Archive in America, in collaboration with Triangle Arts Association.

The program is supported, in part, by Taipei Cultural Center in New York and public funds from the New York City Department of Cultural Affairs in partnership with the City Council.