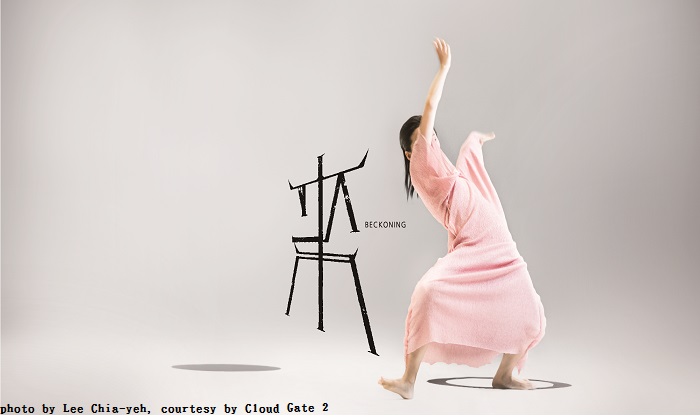 “People can often turn into another identity in one instant. And I am fascinated by how these changes take place on their bodies, expressions and tones,” said CHENG Tsung-lung. Distilling movements subtly from Taiwanese street-dancing ritual of Ba Jia Jiang(the ‘Eight Infernal Generals’), CHENG has created a mysterious zigzag of body language that gives this abstract work a playful and yet poetic quality.

This performances of Beckoning are made possible with the support of the Ministry of Cultures, Republic of China, Taipei Cultural Center of TECO in New York, Asian Cultural Council.

Cloud Gate 2 was formed in 1999 by Lin Hwai-min, Founder and Artistic Director of Cloud Gate Dance Theatre of Taiwan, with the late LO Man-fei, a choreographer and former Cloud Gate dancer, as its Artistic Director.After LO’s passing in 2006, Lin acted as the company’s director for eight years until CHENG Tsung-lung took post in 2014.

Unlike most junior companies, Cloud Gate 2 does not prepare dancers for Cloud Gate Dance Theatre of Taiwan, nor does it perform Lin Hwai-min’s choreographies. It showcases talented young dancers in original works by innovative young choreographers. The company’s annual season, Spring Riot, is one of the most anticipated art events in Taiwan.

The company’s current repertoire consists of works by CHENG Tsung-lung, BulareyaungPagarlava, who has been twice commissioned to create works for the Martha Graham Dance Company, award-winning HUANG Yi, as well as WU Kuo-chu, the late Artistic Director of the Tanztheater at Staastheater Kassel.

In addition to its concert performances, Cloud Gate 2 also reaches out to tens of thousands of people by holding free outdoor performances, and through residency programs on campuses and grass-roots communities in Taiwan.

Invited to perform at Sadler’s Wells London in November 2016 for its UK debut, Cloud Gate 2 made its first international tour in 2012 to the U.S., Germany and China, receiving high acclaims. Reviewing its New York debut at the Joyce Theater, the New York Times said, “Talent and skill require little translation… Cloud Gate 2 has those virtues, it’s only right that they should be shared with the rest of the world.”

CHENG’s family owns a slipper factory. Hawking slippers on the sidewalks was part of his childhood and adolescent life. The dynamics of street life and pedestrians’ behavior later became the source of inspiration for his choreography.

After graduating from the Dance Department of Taipei National University of the Arts, CHENG performed internationally with Cloud Gate Dance Theatre of Taiwan from 2002 to 2004. He served as the Resident Choreographer for Cloud Gate 2 from 2006 to 2010.