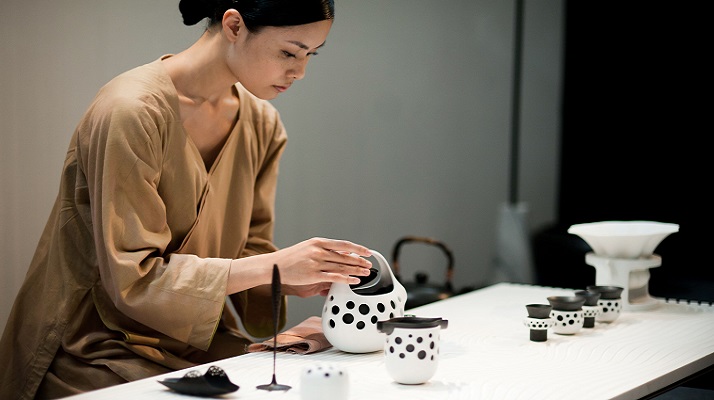 Yi Cha Huei Yo（以茶會友）, which literally means “meeting friends over tea” or “friends of tea” in Chinese, is the very essence of Taiwan’s tea culture that will be demonstrated in this performance entitled “Temperature.”

As an old Chinese saying goes: welcoming a friend from afar gives one great delight, “Temperature” celebrates friendship and is the second chapter of “Slow‧Flow” by Lin Ceramics. It opens with the tea master making a fire, preparing to welcome a friend with tea. As the warmth diffuses in the space, the tea master performs the classic tea ceremony.

“Tea Party” attempts to give a novel, contemporary perspective on tea cultures in Asia. It reintroduces traditional tea culture to the young generation in a modern, trendy manner so that this thousand year old culture can evolve with the times and stay relevant. Audiences explore a new vision of tea culture during the performance that not only presents a tea ceremony, but also gives a whole new look to tea-drinking. For this performance several design teams worked together on every single element- the tea ware, tea table, costumes, music, stage setting, and dance-to create this piece. Tea Party-Slow Flow was the winner of Design for Asia Awards 2013 and iF Design Award 2014 (in the discipline of communication).

During the week-long stay in New York, apart from its premiere at Taipei Cultural Center, “Tea Party” will also be performed at Queens Museum and Mid-Manhattan Library. In addition, collaborated with Tenri Cultural Institute of New York, an unprecedented double-dose tea ceremony titled “When Match Meets Oolong: A Japanese-Taiwanese Joint Tea Ceremony” will be presented as well. This event will offer a rare opportunity for tea lovers to witness two different ceremonies practiced by professional tea masters from Japan and Taiwan. Apart from learning about the essence of Japan and Taiwan’s tea culture, guests will also be able to taste different varieties of tea, as well as tea snacks.

For registration, please email to Ms. Kazuko Takizawa at ktakizawa@tenri.org. The first 30 guests to sign up for the event will receive a traditional clay tea cup made by Taiwan’s noted tea ware maker Lin Ceramics Studio.
(Since announcing our upcoming event “When Matcha Meets Oolong—A Joint Taiwanese-Japanese Tea Ceremony" we've gotten a great response! Registration is still open, but unfortunately, due to the number of people interested in the event, we will not be able to provide guests who sign up now with a tea cup souvenir. However, guests can qualify for a no-show's tea cup based on the order in which they RSVP'd.)