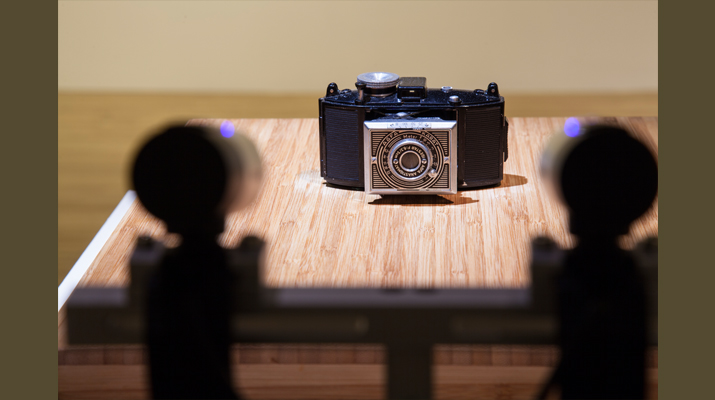 The installation combines everyday objects with real-time video and virtual stereoscopic computer-generated animation to explore memory, dreams, and what lies beneath the surface of consciousness. The exhibition space will display the four objects, worn leather shoes, a camera, a watch, and dentures in a glass – which were remade based on Huang Hsin-Chien’s memory, then captured by a high-resolution camera. These objects are placed on pedestals with one-way mirrors above them and, similar to an interrogation chamber, behind the mirrors is an observation room. The audience can view the items in the room they're displayed in, but in the dark room on the other side of the mirrors they can also, wearing 3D glasses, watch real-time images of the objects on 3D projectors as they are captured by cameras. These images merge in real time into virtual 3D images on top of them. These objects are from the old apartment building Huang Hsin-Chien lived when he was young, and they will, like plants, sprout forth from the surface of these inherited objects, growing and dying.

This exhibition is organized by Herbert F. Johnson Museum of Art, Cornell University and the Taipei Cultural Center in New York, this exhibition received support from the Taiwanese Ministry of Culture.

Hsin-Chien Huang is an artist skilled in digital technology and with an artistic outlook. After graduating from National Taiwan University with a degree in mechanical engineering, Huang earned a BA from Art Center in Pasadena, CA. He later obtained a master's in design and was admitted to PhD candidacy at Illinois Institute of Technology. Huang's works integrate digital technology and traditional art, demonstrating an impressive depth. Huang has collaborated many times with the American media artist Laurie Anderson, including creating her first interactive CD-ROM, Puppet Motel. He has also worked as art director for video game companies such as Sony and Sega, earning a number of international multimedia design awards in the process. After returning to Taiwan in 2001, Huang founded his studio Storynest and devoted himself to artistic creation and commercial design. He also served as resident artist at Chinese Culture University and taught interactive multimedia design classes at many universities, including National Chiao Tung University and National Taiwan Normal University. Huang is currently a full-time associate professor on the Master's Program in Digital Content and Technologies of National Chengchi University's College of Communication.

An-yi Pan researches Buddhist Art with special interest in the relation between Chinese intellectual participation in Buddhism and Buddhist painting, Buddhist architecture in relation to precepts, monastic hieratic structure, liturgical as well as spiritual spaces, and trans-continental blossoming of Buddhist teachings and art. He also devotes research to Modern Chinese art and Contemporary Taiwanese art, investigating the impact of colonialism and current geo-political influence on Chinese and Taiwanese art from the late 19th century to now.